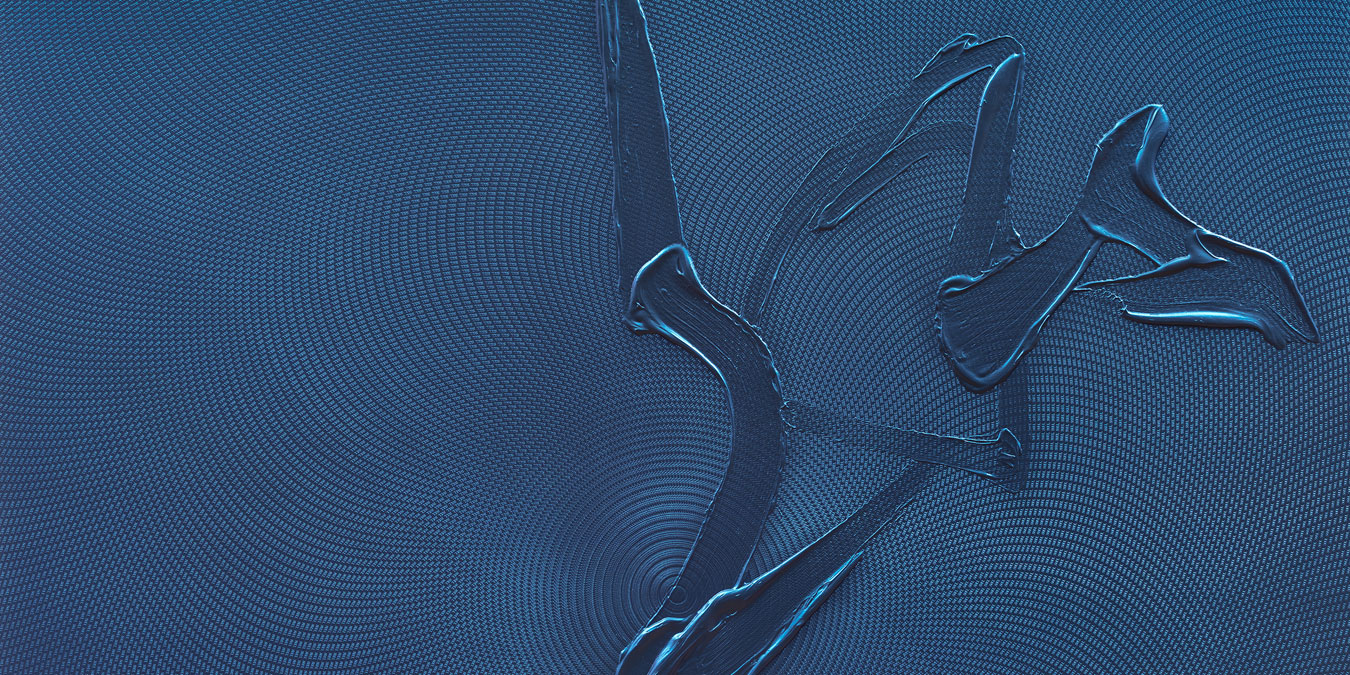 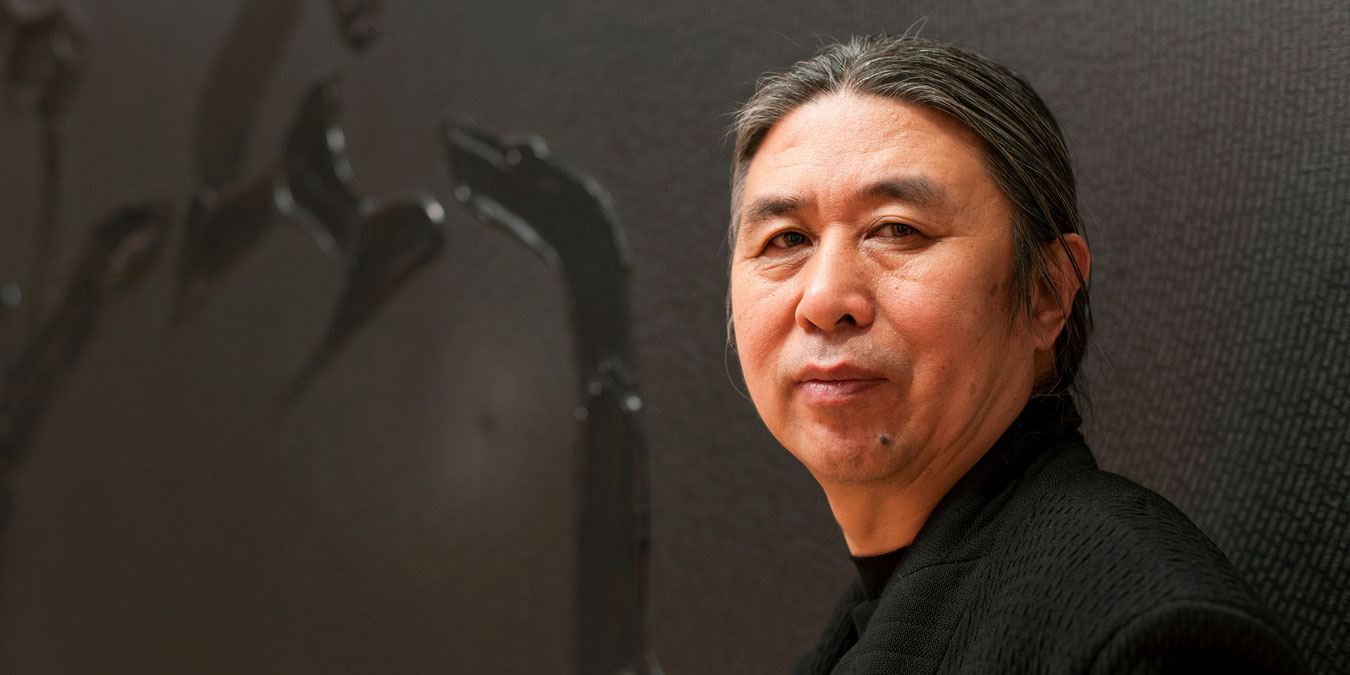 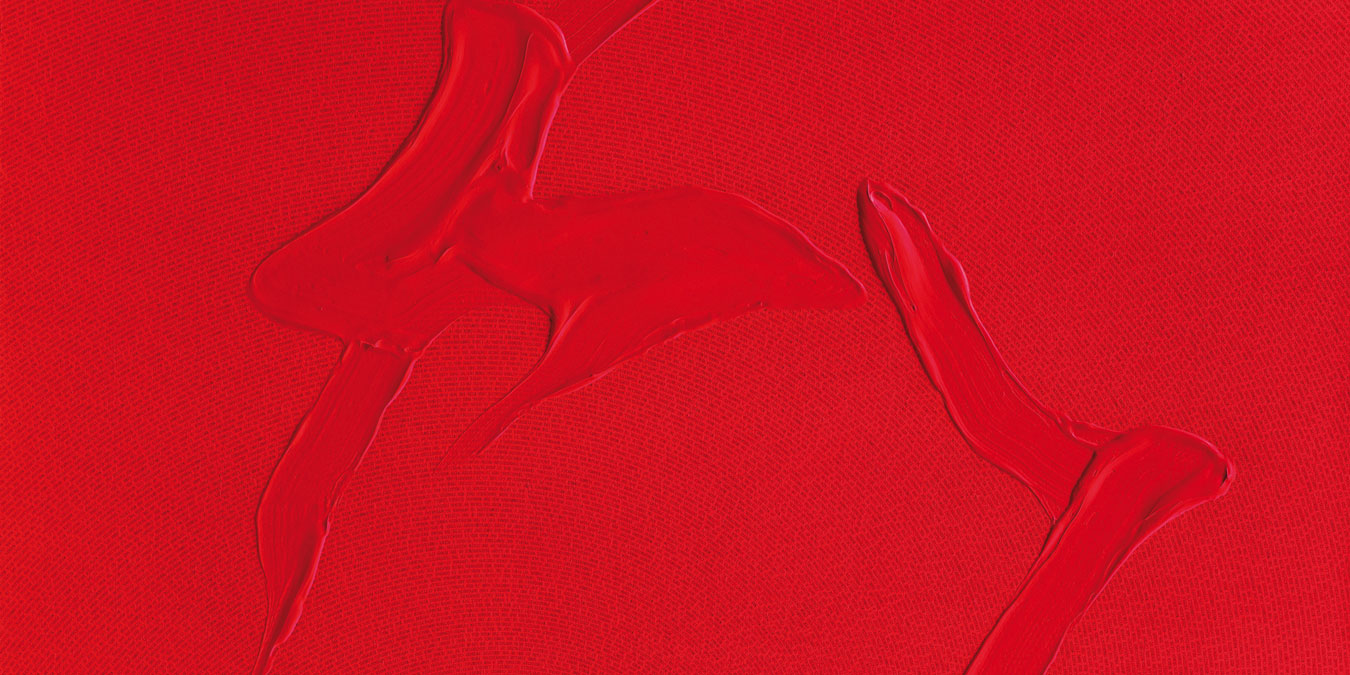 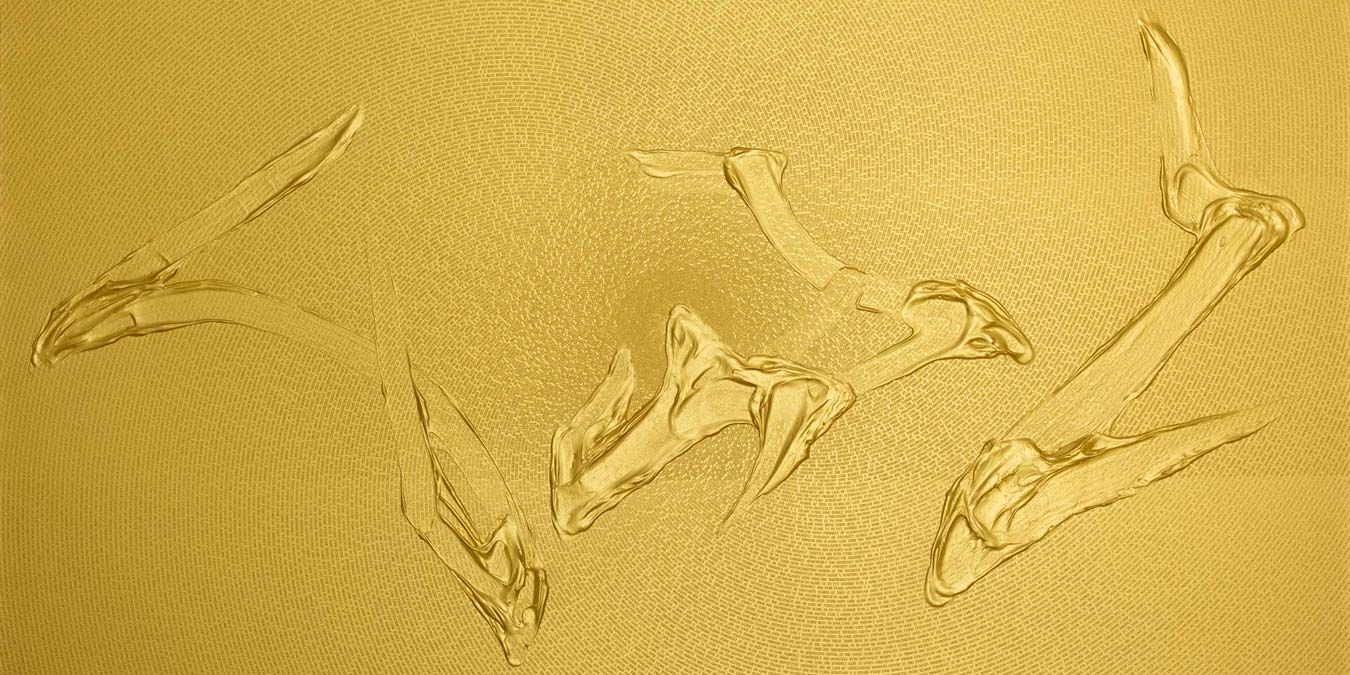 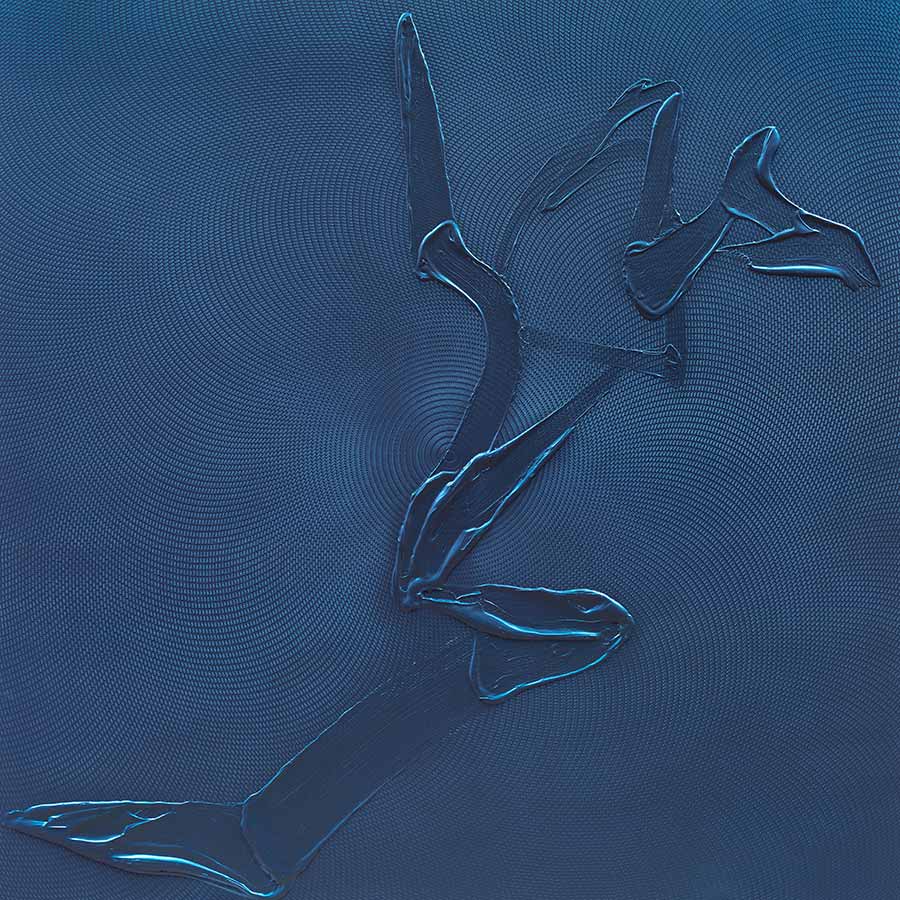 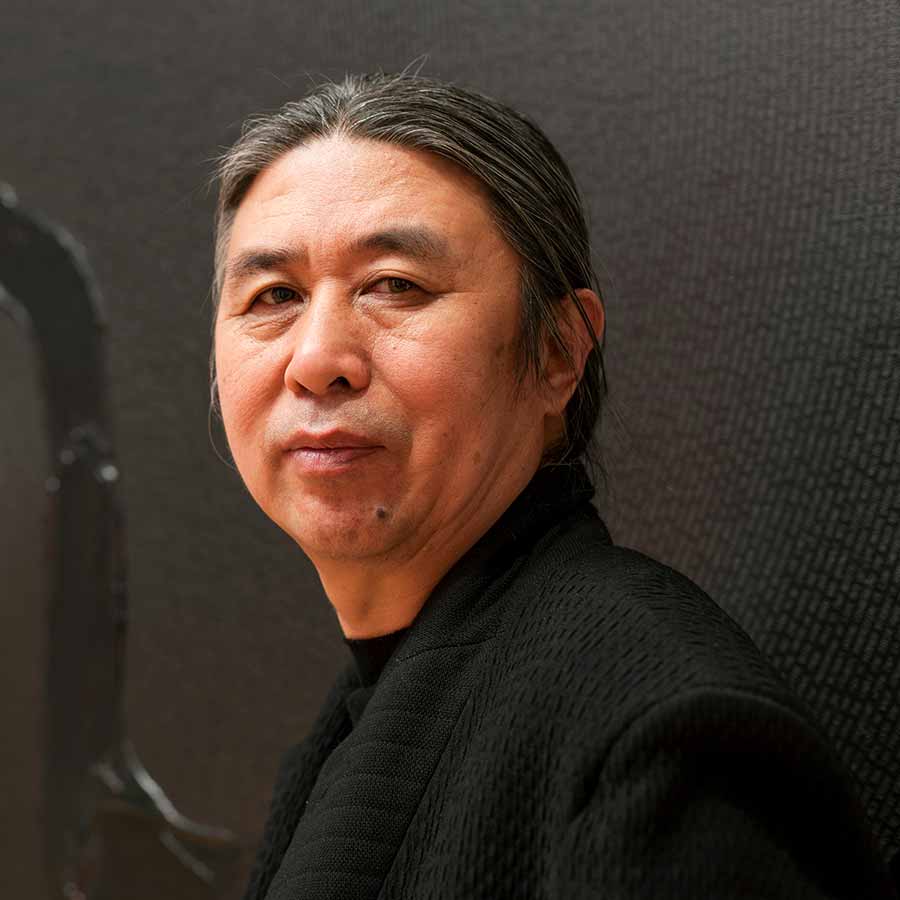 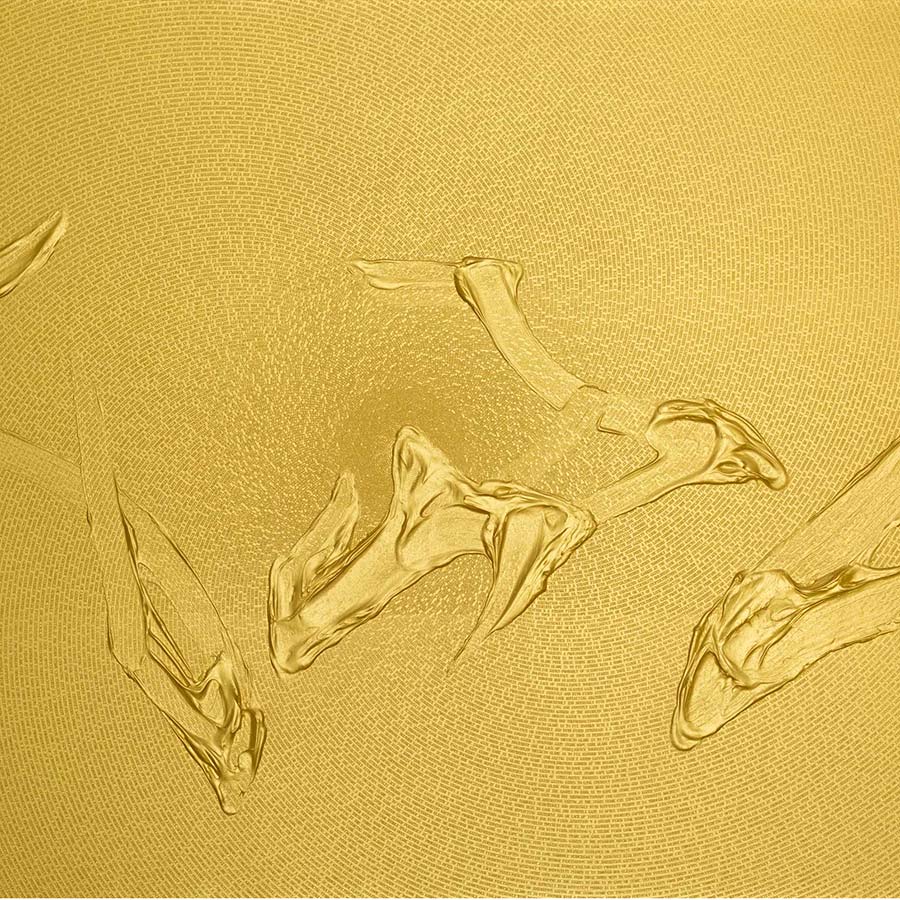 Tian Wei is renowned for his striking monochromatic canvases in bold colours that explore the written word and the plasticity of meaning.

Both theoretically and formally, Tian Wei’s work constructs a bridge between things that appear as polar opposites or complementary pairs. Using the Chinese idea of contraries held in balance (yin and yang), words and quotations in minute script fill the backdrop of Tian’s paintings, forming a patterned ground on which larger semi-abstract shapes are drawn. On trying to read these foregrounded lines as Chinese characters, however, anyone familiar with Chinese ideographic script is soon frustrated, since the unfamiliar writing can only be resolved in English. In fact, the cursive lines spell out simple English words, such as ‘sexy,’ ‘soul’ and ‘red.’ These selected English adjectives and nouns represented in Chinese calligraphic style give the viewer insight into the artist’s lived experience of an emerging synergy between eastern and western sensibilities.

Tian Wei was born in Xi’an, the first imperial capital of China, a city which, as the starting point of the Silk Road played a seminal role in linking east and west together in a complex network of trade and reciprocal exchange. Steeped in the histories of Chinese cultures, Xi’an is rich in museums, including the famous Beilin Museum, whose ‘Stele Forest’ represents the most important repository of Chinese calligraphy in existence. Tian left China for Hawaii, in 1986, to pursue a career in the arts. Upon completing his MFA in Hawaii, in 1990, he subsequently settled in California. After years of travelling between America and China, he has been based in Beijing since 2011. Tian Wei was selected as an Artist-in-Residence for the Getty Research Institute’s 2017/2018 residency programme, which explored the theme of “Iconoclasm and Vandalism.”

Tian Wei received a scholarship to attend the University of Hawaii in 1986, graduating, in 1990, as MFA. In 1990, a solo exhibition of Tian’s work, entitled From Mainland China to Los Angeles: Wei Tian Painting and Drawings from 1980 - 1990, was held at the Armory Center for the Arts, California. The exhibition was curated by Josine Ianco-Starrels, former Director of the Municipal Art Gallery of Los Angeles.

In 2008, the Guangdong Museum of Art, Beijing, held a solo show, Oil Paintings by Tian Wei, curated by Fan Di’an, Director of the National Art Museum of China. That same year, Tian was part of the exhibition , Mahjong: Contemporary Chinese Art from the Sigg Collection, at UC Berkeley Art Museum, California.

October Gallery held solo exhibitions of Tian Wei's work in 2014 and again in 2018.

Tian Wei’s work can be found in the collections of M+, West Kowloon Cultural District, Hong Kong, the Getty Research Institute, Los Angeles, USA, MoCA Shanghai, China, the Sigg Collection, Switzerland, the National Art Museum of China, Beijing and the State Foundation on Culture and the Arts (SFCA), Hawaii, USA, amongst others.
View Artist Page
Related Items From Our Store 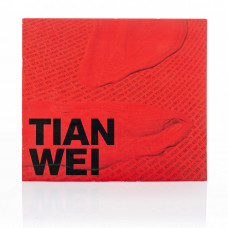 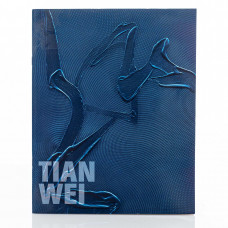