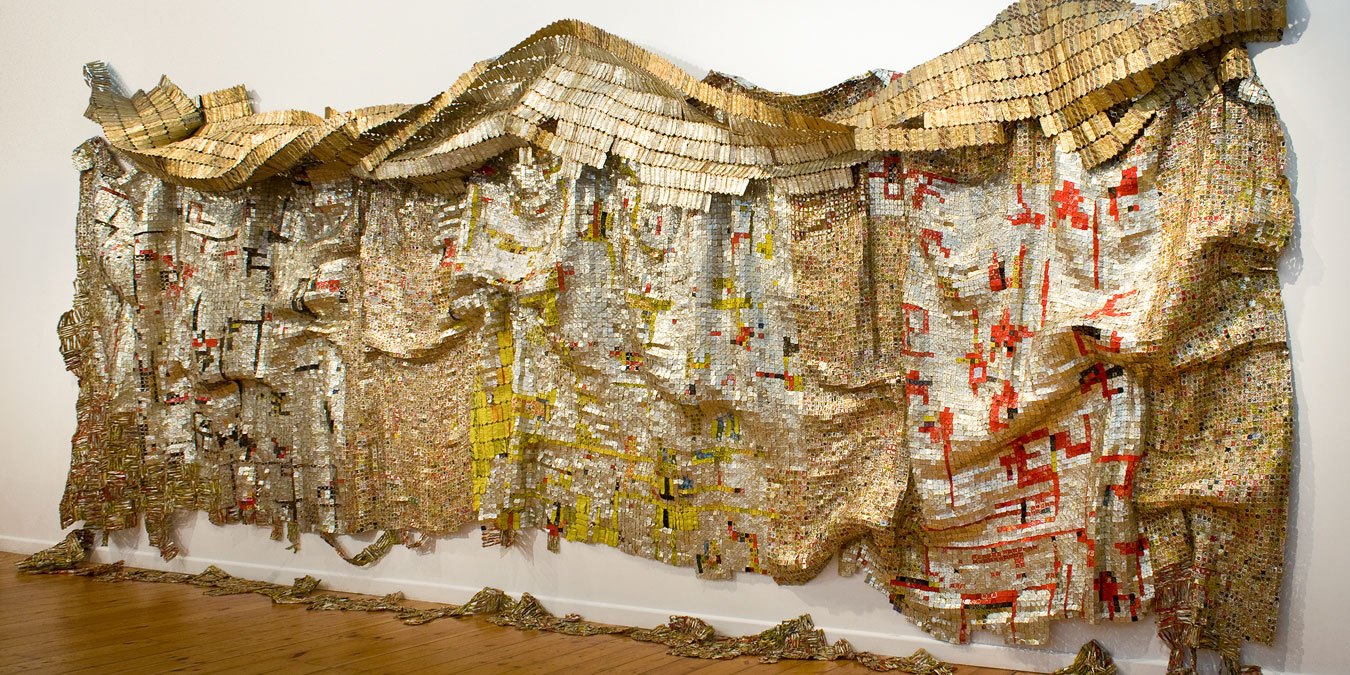 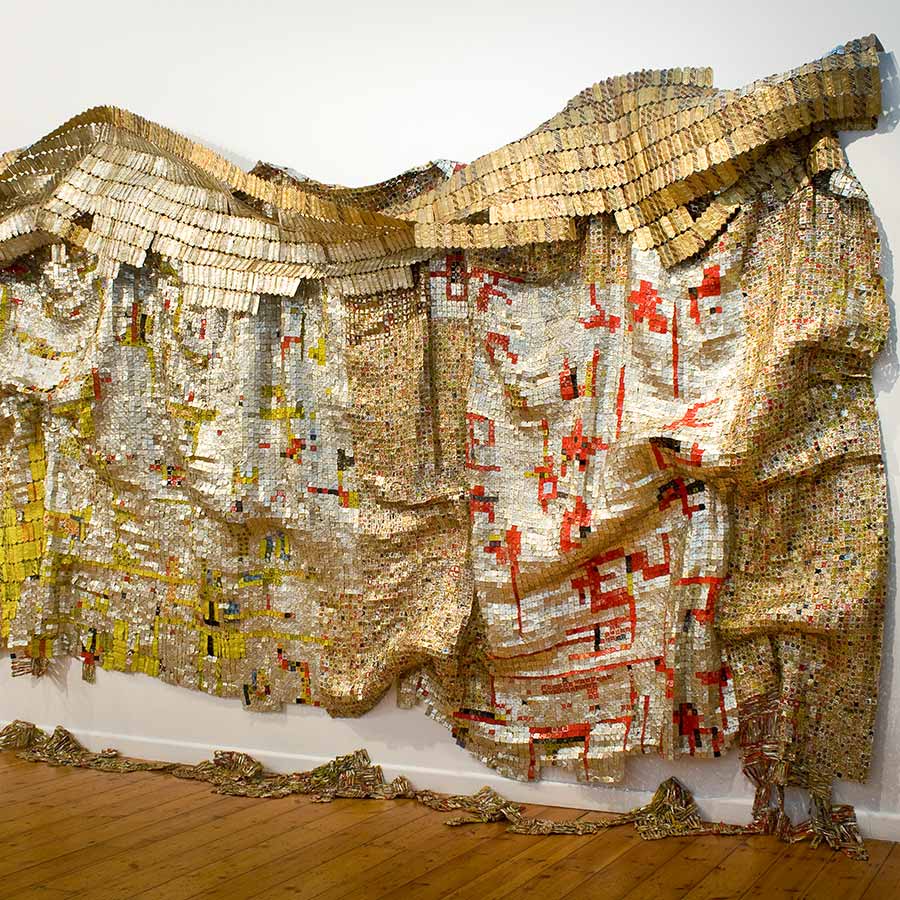 October Gallery continues to promote the trans-cultural avant-garde by representing acclaimed artists from around the world. This summer exhibition is no exception.The exhibition focuses upon master-works of global contemporary art which engage in powerfully interactive dialogues indicative of today’s rapidly globalising art world.

This exhibition will feature a major work, by El Anatsui, Skylines? (2008), for the first time ever in London. October Gallery, in 2002, exhibited the first two “cloths” by El Anatsui, made of hand-sewn recycled liquor bottle-tops translated into sumptuous works of art. Ten years later, El Anatsui represents the epitome of the contemporary global artist whose name and works are recognised around the world.

Nnenna Okore uses discarded materials of clay, newspaper, wax and rope to create her otherworldly sculptures of dramatic form. Now working from the US, Okore’s work stands confidently alongside that of her erstwhile mentor whilst engaging it in intimate and playful conversations. Another global contemporary artist is Owusu-Ankomah, who today lives and works in Germany. His canvases employ historically and geographically diverse visual references: from Saharan rock painting and Renaissance sculpture, to Ghanaian textile designs, Chinese calligraphy, New York graffiti and capoeira martial arts from Brazil. He blends this medley of heterogeneous symbols into a cogent plea for a re-imagined world of infinite possibilities, which he terms the Microcron.

All the artists exhibited have been close friends and collaborators with October Gallery over many years. October Gallery gave the first UK solo show to the prolific writer and artist, William S. Burroughs in 1988, and continues to represent Burroughs’ pioneering experimentation in cross-media artistic processes today. In London, the versatile Burroughs, together with his close friend Brion Gysin, encountered the work of another visionary artist, Gerald Wilde, whose unique work, in 1979, had formed the first-ever October Gallery exhibition. To extend this range of past-masters, the exhibition contains canvases by Kenji Yoshida, whose ethereal gold, silver and precious metals on canvas unite a restrained tradition of Japanese appliqué work with that modernist European aesthetic of which Yoshida was a leading Parisian exponent.

Rachid Koraïchi is informed by the Islamic concept of Safar, the spiritual journey of transcendence. His multimedia work begins with the intricate beauty of the Arabic calligraphic scripts and is also composed of symbols, glyphs and ciphers drawn from a wide variety of other languages and cultures. Golnaz Fathi completed a long and intense training in Persian calligraphy before deciding to follow her true passion for the pictorial in which she transforms calligraphy in increasingly expressive and abstract ways.

The acrylic paintings of London based, Nepalese artist, Govinda Sah resemble universes imploding in infinite space. To ground these interconnected metalogues of past and future visions in the current world of history, Laila Shawa, an artist from Palestine living in exile in London, provides a more dystopian view of the real world we all inhabit together. To engage directly with the realities of present atrocities in the Middle East is, however, as Shawa always reminds us, also to imagine the possibility of a better future towards which we must all strive in common.

The exhibition will also include Beninese artist Julien Sinzogan - with his finely drawn and detailed works of the spirits of slaves returning to Africa – and Guyanese painter Aubrey Williams whose work evolved through many distinct phases over the course of his career. From immaculately accomplished depictions of birds, to figurations, to explosive, vibrant abstracts, Williams drew influence from abstract expressionism, from Olmec, Maya, and Warrau iconography, from the symphonies and quartets of composer Shostakovich.

Masters of the Transvangarde presents a discriminating selection of international artists who operate between and perhaps even beyond cultures.