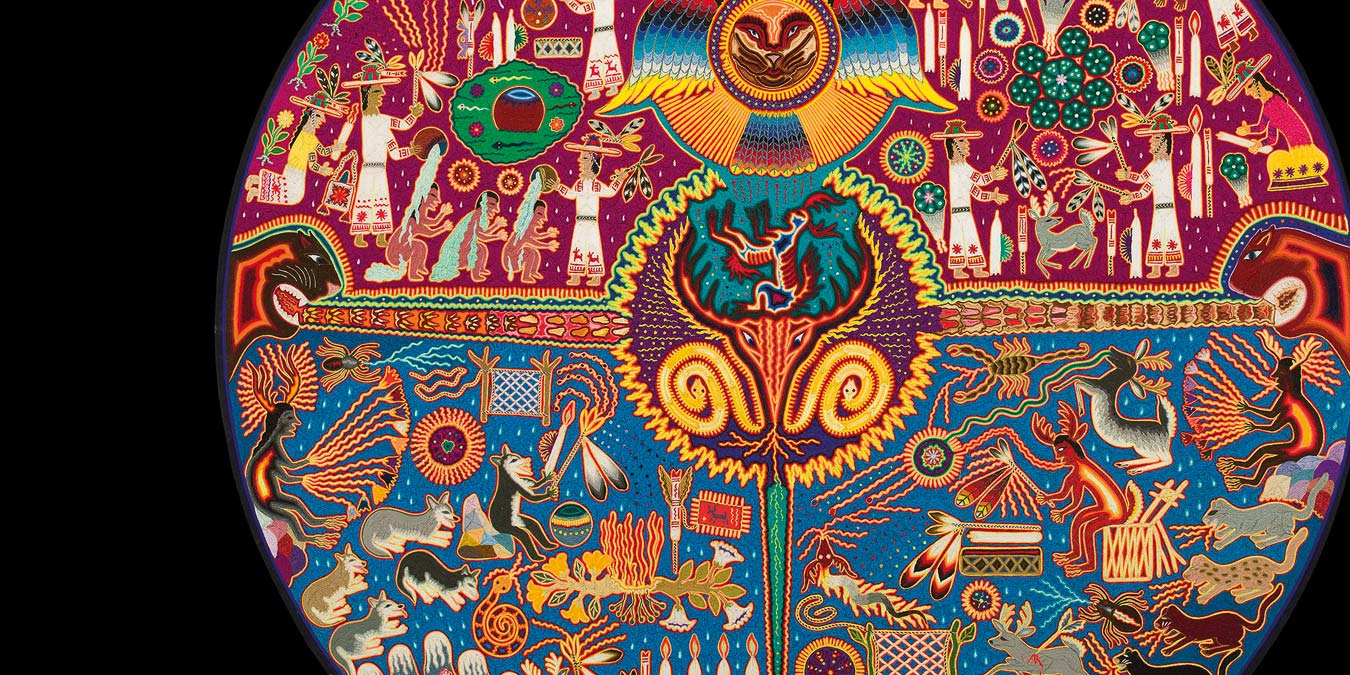 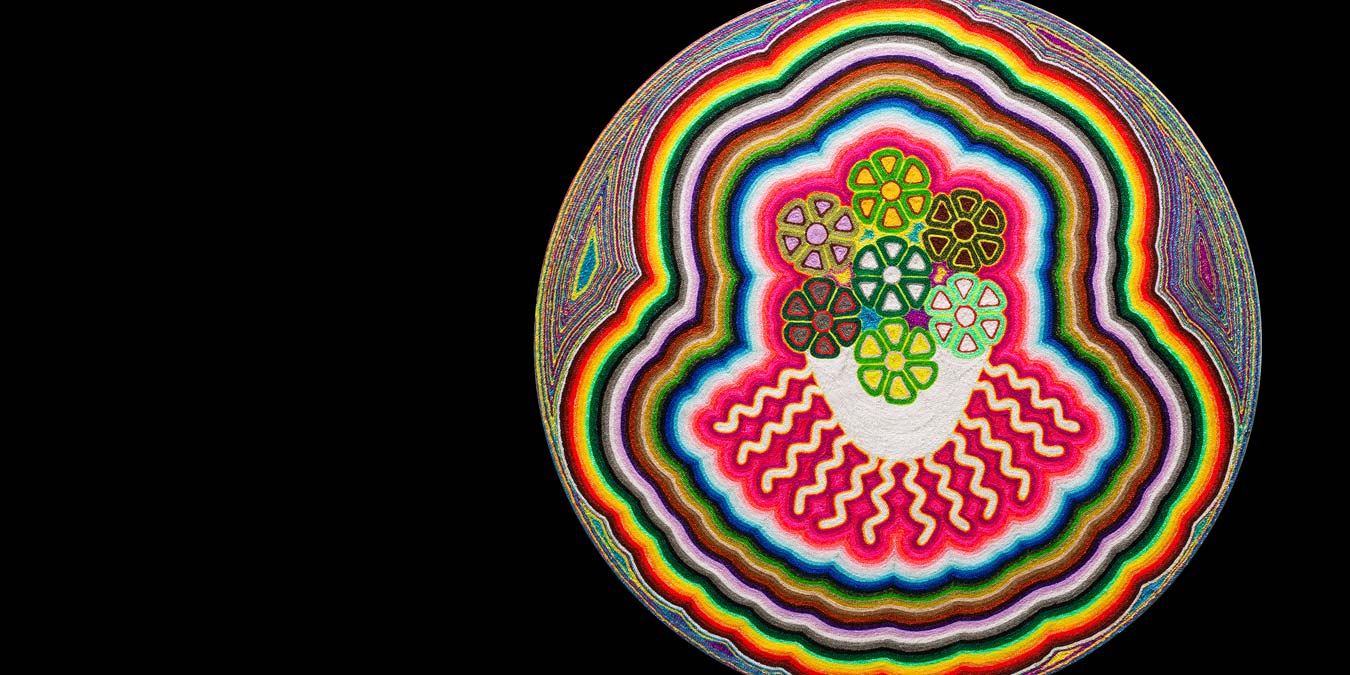 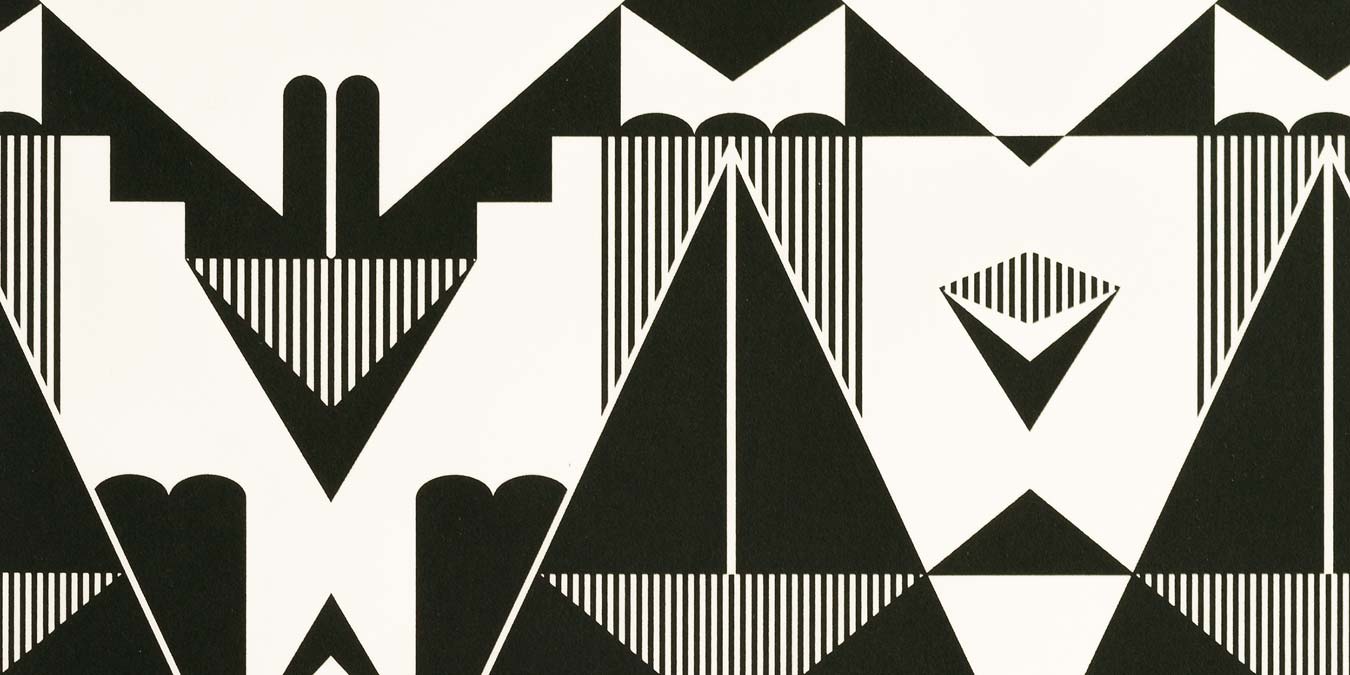 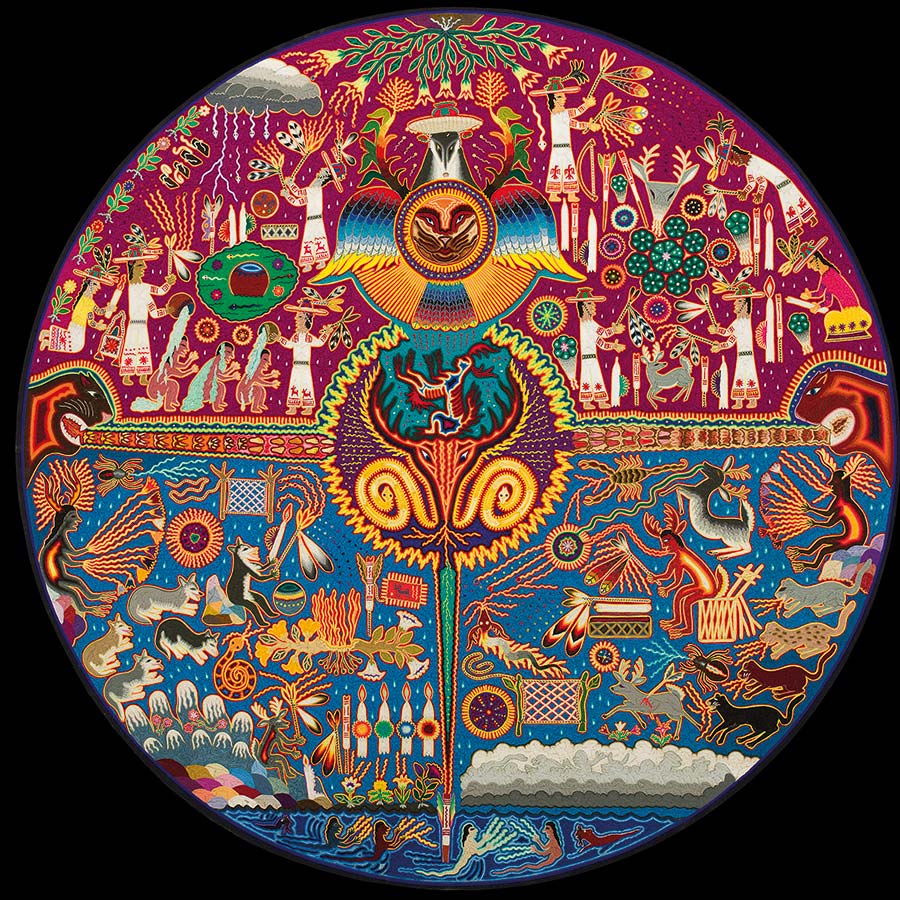 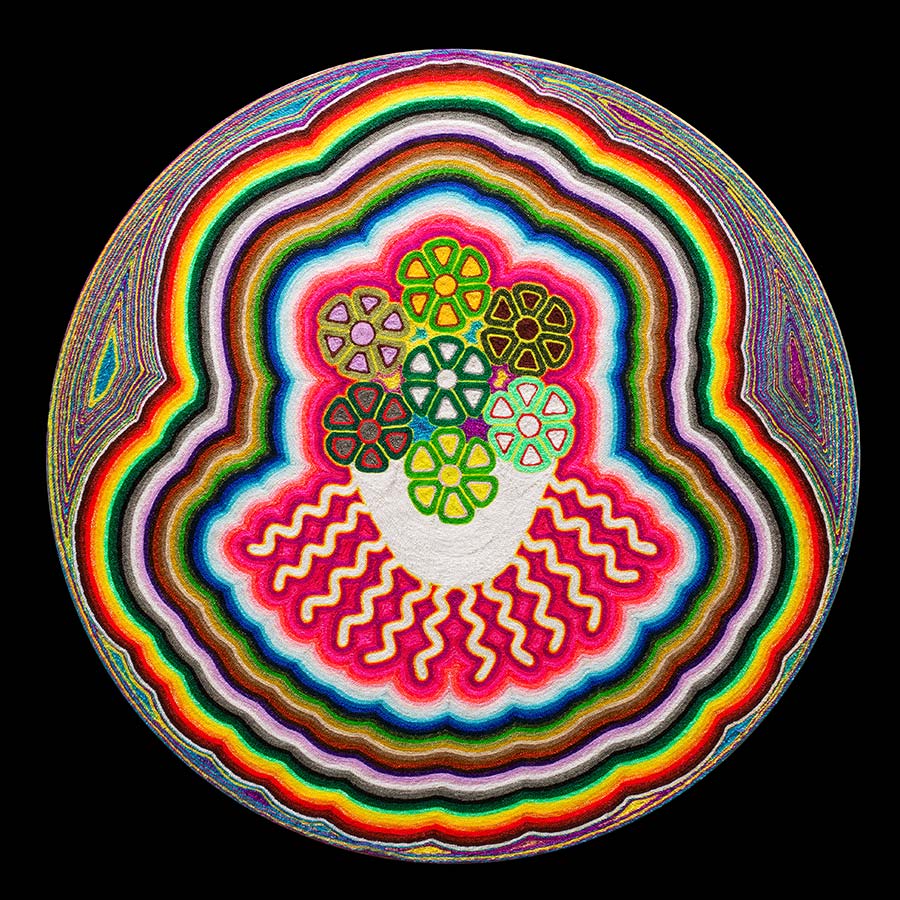 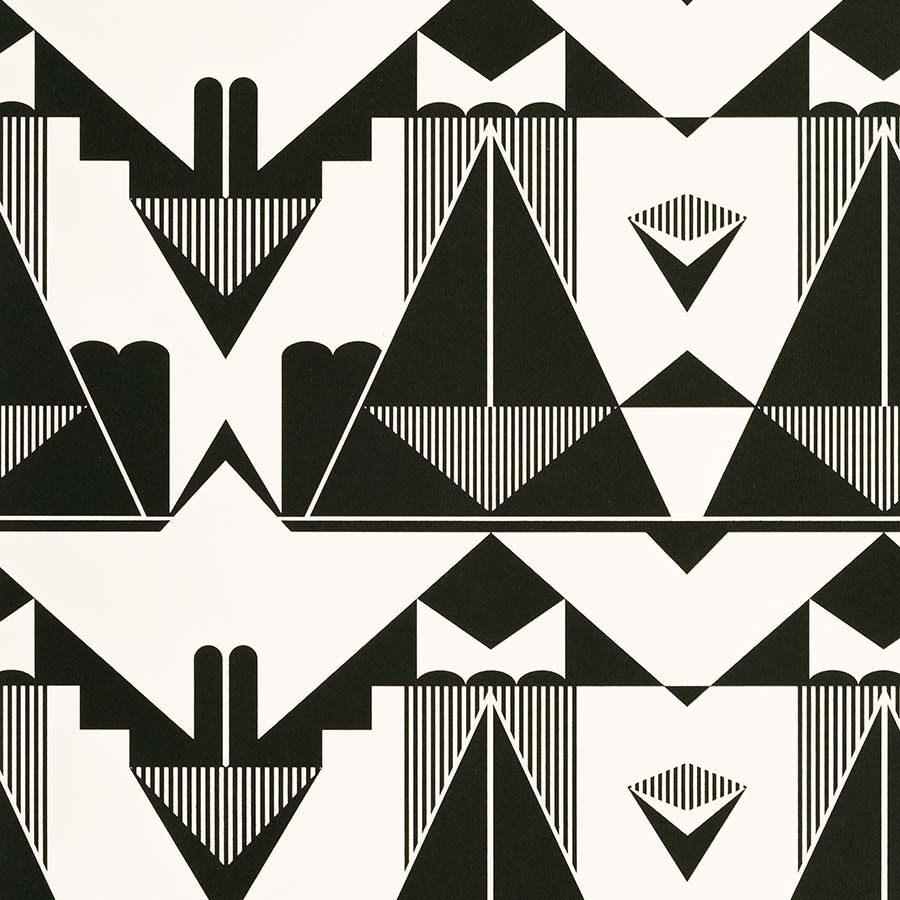 Portal II
Inside the Cordillera

This November Portal II: Inside the Cordillera a group exhibition at October Gallery features the work of Santos Motoapohua de la Torre, Jordan Ann Craig, Gonzalo Hernandez Carrillo and Antonio López Pinedo. The exhibition explores patterns, forms and insights from cultures historically originating from the southern part of the mountain chain, Cordillera, along the western side of the Americas, from northern New Mexico down to Guadalajara, Mexico.

This exhibition - curated by October Gallery’s Director Chili Hawes who comes from the Western Cordillera in Colorado - brings together artists inspired by or living in the ragged igneous and metamorphic rocks of the Cordillera.

The exhibition will feature artists from the Huichol culture, Mexico, who traditionally make works with coloured yarn or small beads pressed on to a wooden surface that have been covered in beeswax. The most renowned Huichol artist in this exhibition is Santos Motoapohua de la Torre whose work captures the Wixarika’s cosmogony. His work was donated by the government of Mexico for installation in the metro station at the Louvre, Paris, and can be found in museums in Chicago, Zacatecas and Nayarit. His Huichol name translates to ”Echo of the Mountain”, the title of a documentary film about him directed by Nicolas Echevarria, which will be shown at the Gallery during the exhibition. Santos Motoapohua de la Torre is from Santa Catarina and now lives and works in Valparaiso.

Jordan Ann Craig, an artist from the Northern Cheyenne, creates paintings, prints and textile works, which are an exploration of existence, time and space, woven from cultural memory and epiphany.

The process is meticulous and meditative, often obsessive in mark and repetition. She draws inspiration from Indigenous textiles, beadwork, pottery and landscapes. Her work shares personal stories through abstraction, colour and rhythm. She engages past, present and future to depict Indigenous design through a contemporary lens. Craig creates new narratives within her work while celebrating her ancestors and Indigenous land. Her abstract paintings and prints expands the definition of Native American art, and how culture is transmitted.

Craig has participated in numerous artist residency programmes and exhibitions nationally and internationally. She earned her BFA from Dartmouth College studying Studio Art and Psychology. Craig’s first residence was in 2018 at the School for Advanced Research, Santa Fe. She is most recently the recipient of the Roswell Artist-in-Residence fellowship, and currently lives and paints in Roswell, New Mexico.

Gonzalo Hernandez Carrillo was born in 1960 in the Huichol community of San Andres, Cohamiata Jalisco and has relocated to the community Santa Catarina Cuexcomatitlan. At the age of 15 he taught himself the art of yarn painting, and in 1985 he began an apprenticeship with artist Mariano Valadez, where he refined his artistic technique. The inspiration for his work comes from the sacred teachings he received as a result of his participation in the traditional ceremonies and the pilgrimages he undertook during his position as temple official in the ceremonial centres of Pochotita and Las Latas.  His yarn paintings represent the cosmological universe of the Huichol deities and ancestors. They reflect years of dedication to the study of his religious traditions.

Antonio López Pinedo was raised in a family of Marakames in the Huichol community of Santa Catarina and moved to Guadalajara as a young man where he continues to live and work. Having been brought up by the Marakames, Pinedo learned the importance of ceremonies and pilgrimages. Like Carrillo, Pinedo uses the art of yarn painting inspired by his upbringing. He tries to recreate the visual state that peyote produces.

This exhibition draws inspiration from Mike Jay’s book Mescaline, a definitive history of mescaline, exploring its mind-altering effect across cultures, from ancient Americas to western modernity. From central and northern Mexico to the Rio Grande Valley of the Southwest of the United States, Native Americans have historically used the principal plant medicine Peyote (Lophophora williamsii) which contains mescaline. Further south, the Huichol from Nayarit, Jalisco and Zacatecas undertake an annual pilgrimage to San Luis Potosi, their considered homeland where they ceremonially hunt for the sacred Peyote. Copies of the book Mescaline will be available at the Gallery during the exhibition. 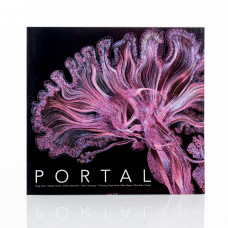 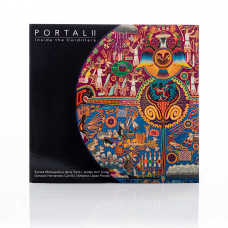 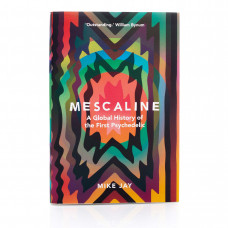 Mescaline: A Global History of the First Psychedelic by Mike Jay (Hardcover)
£19.00