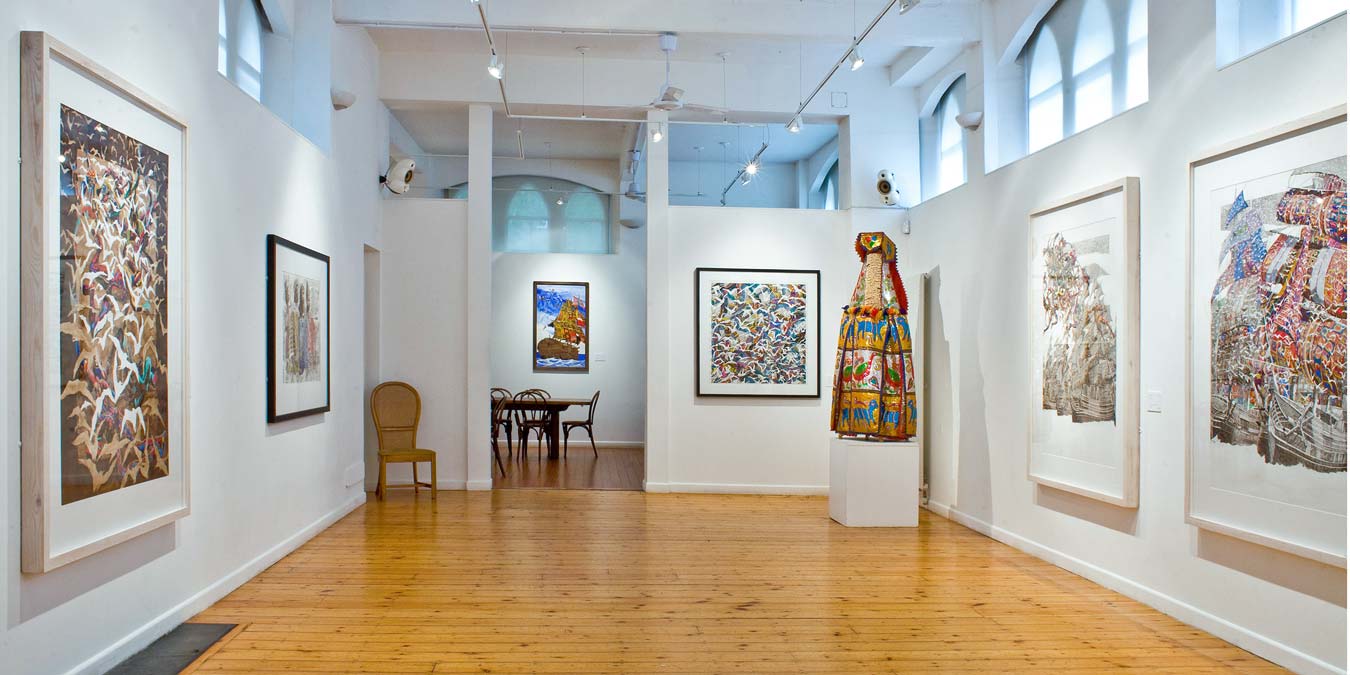 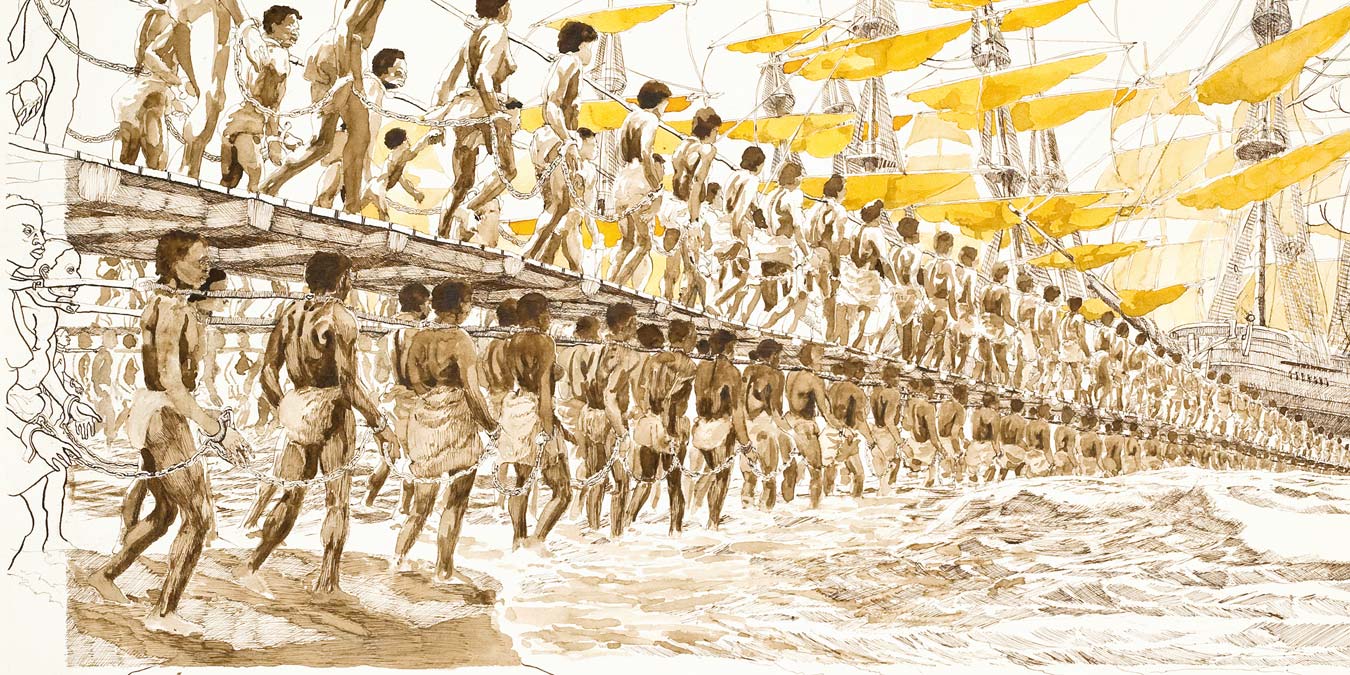 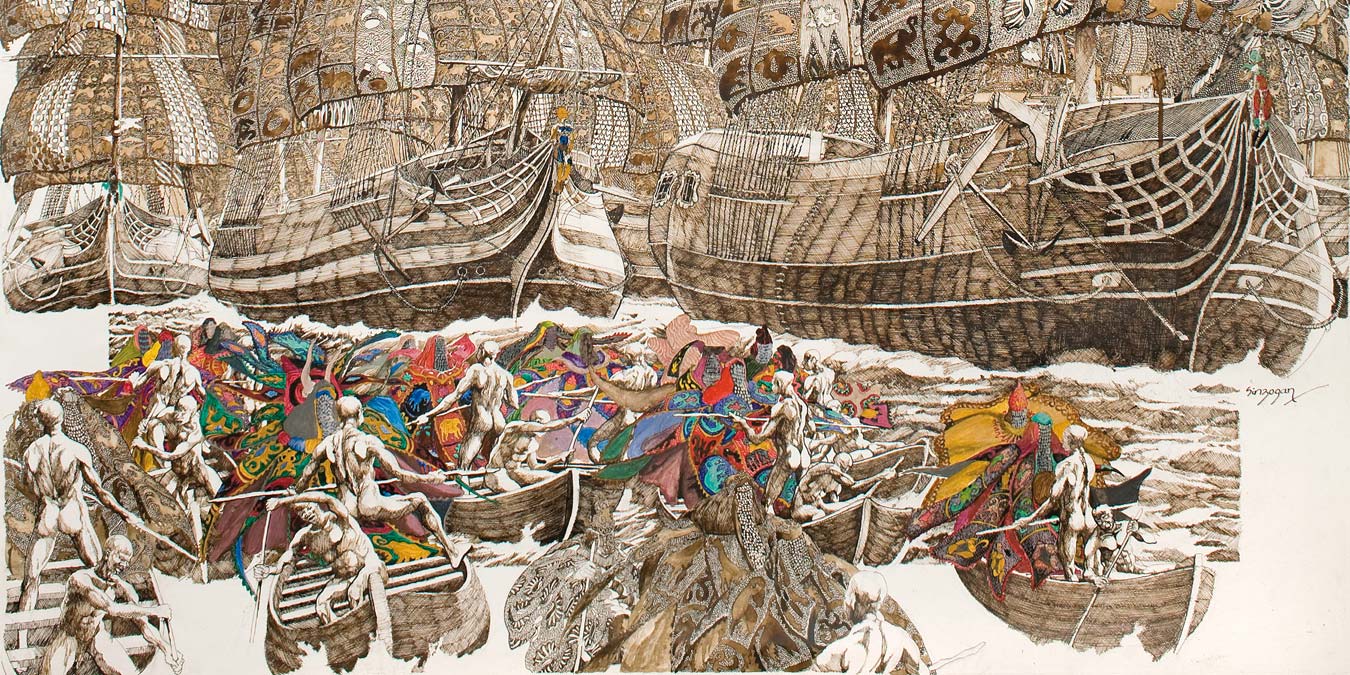 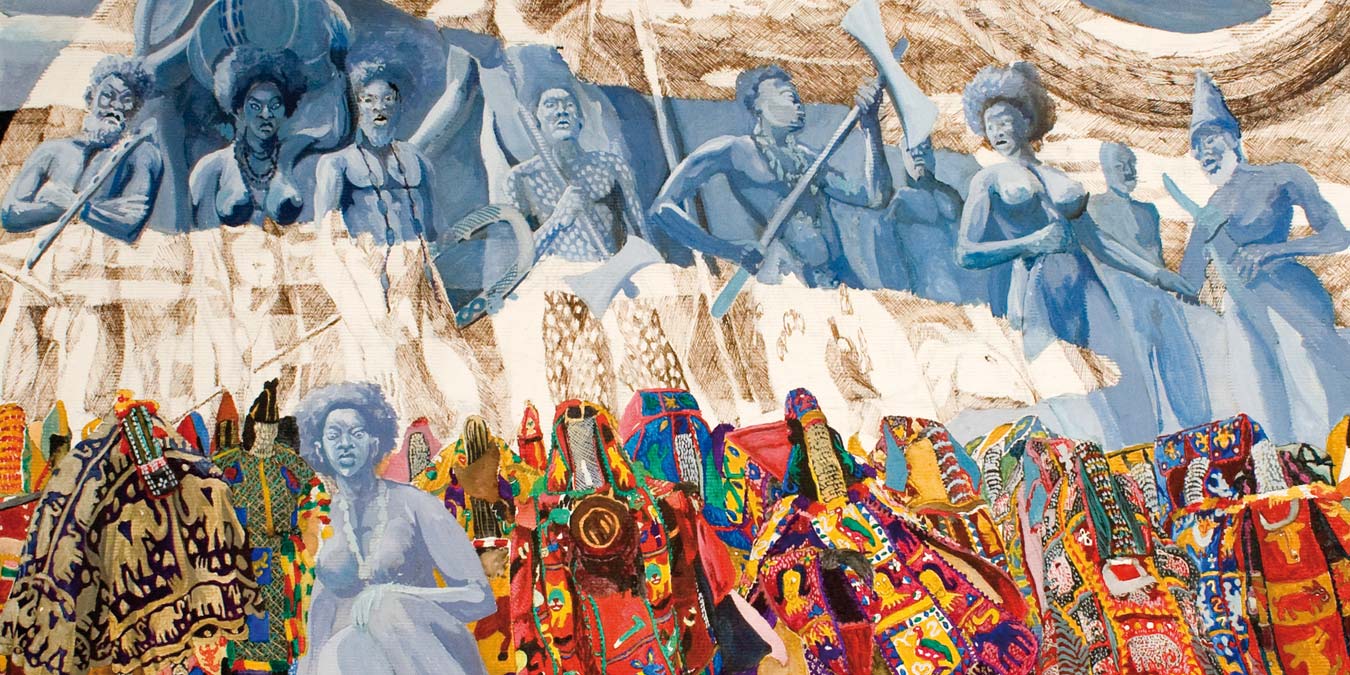 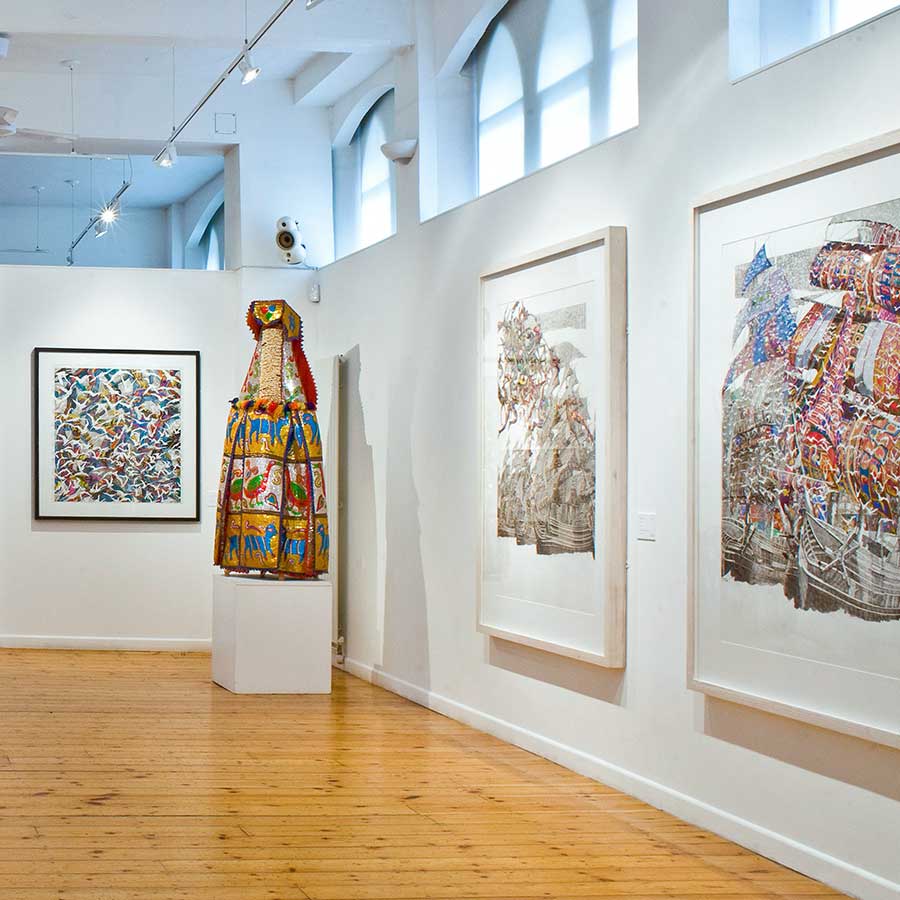 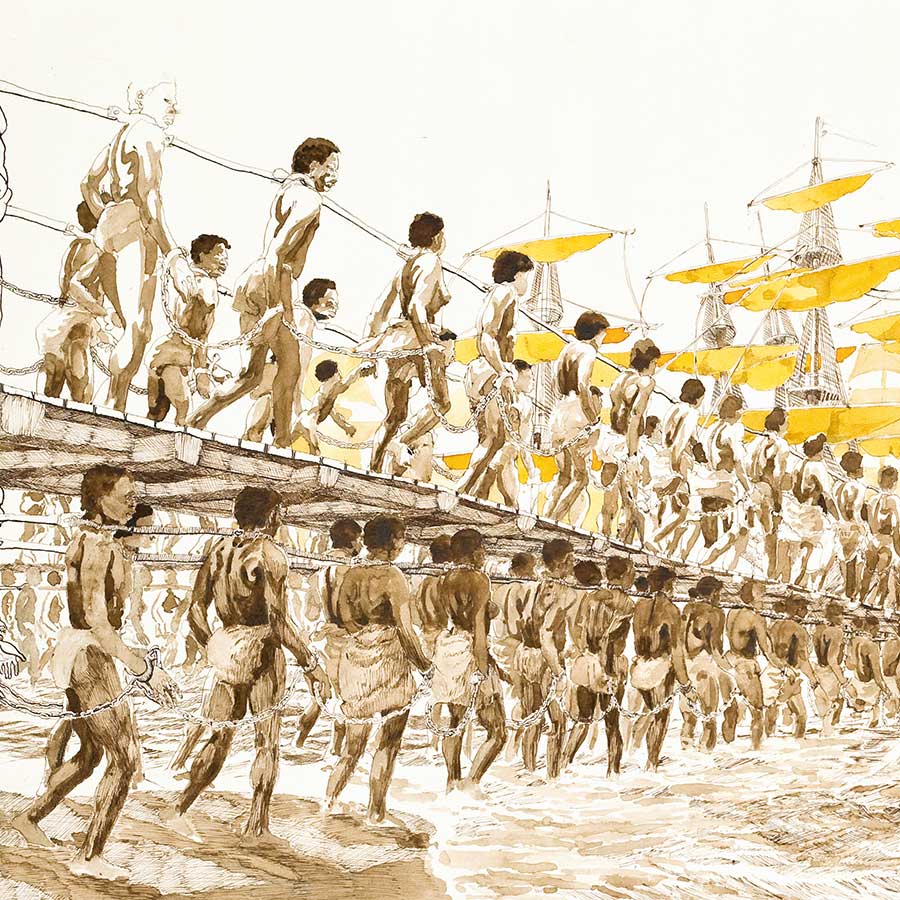 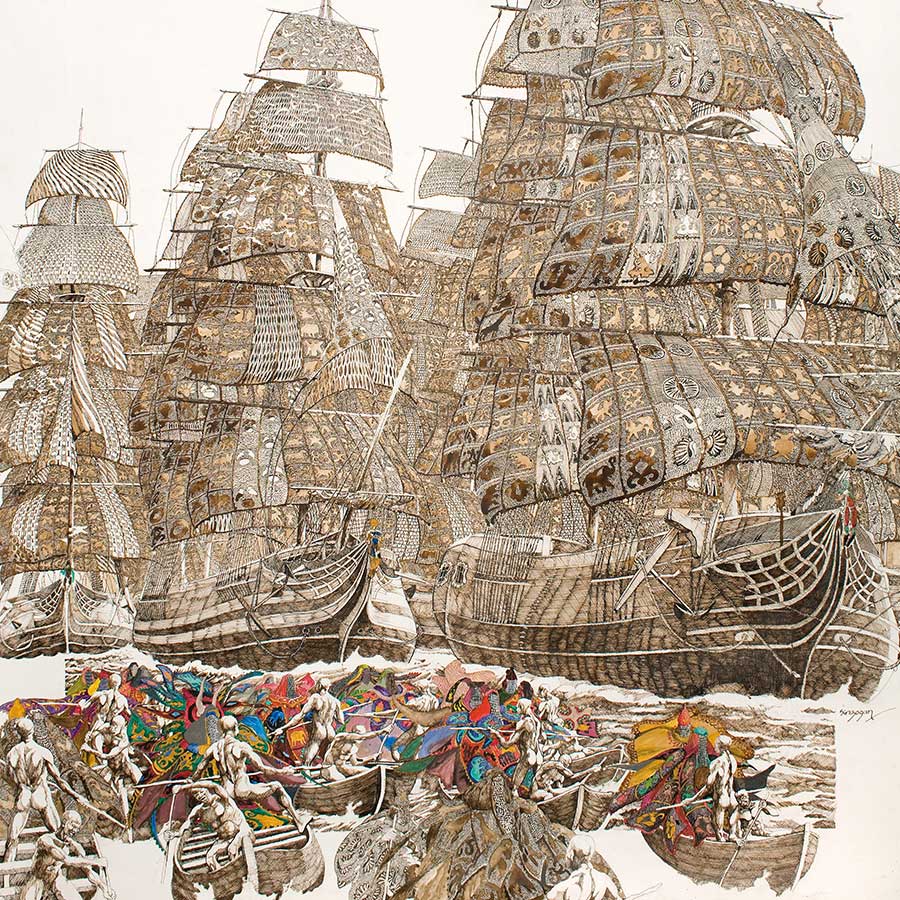 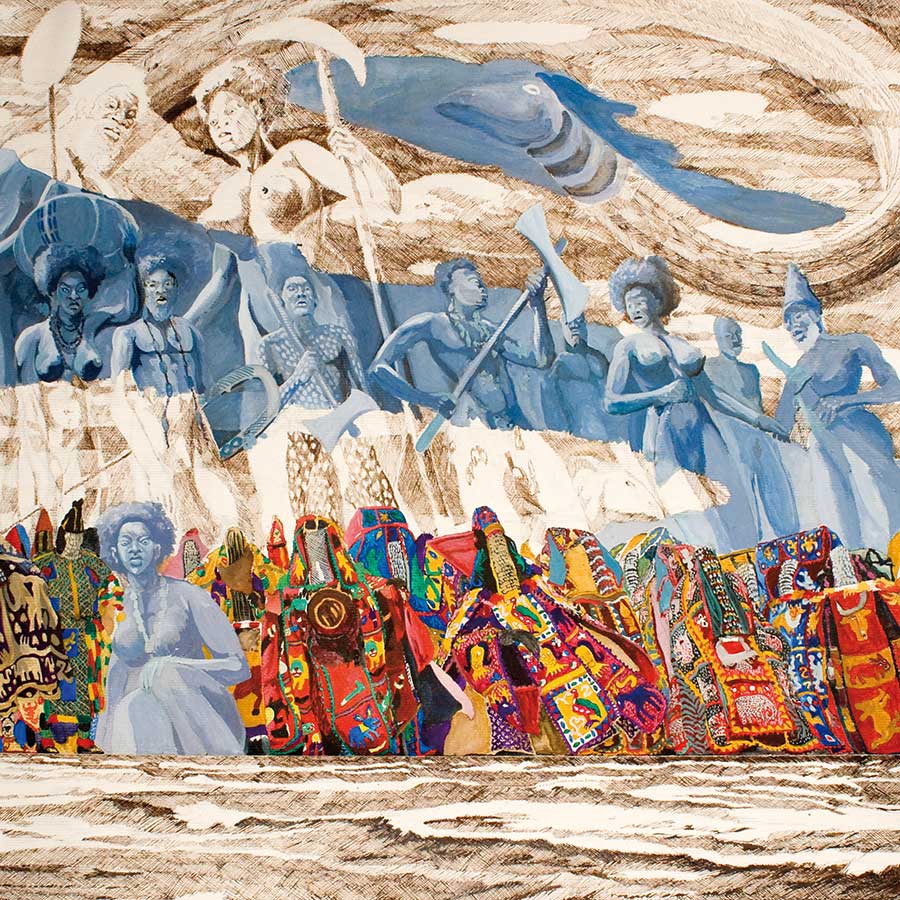 Sinzogan originally trained as an architect and his use of painted pen-and-ink displays the astonishing, technical sophistication of a master draughtsman. His  work is as much about the transmigration of African ‘soul’ – the persistence of her dreams, visions, ideas and unique cultural identities - across the Atlantic to the New World beyond, as it is about the return of the spirits of slaves to the African shores.

To understand Sinzogan’s work requires a certain familiarity with ideas characteristically found amongst West African groups such as the Yoruba and Fon peoples of Nigeria and Benin. In “vodoun” – one of the chief indigenous religions of Benin, it is understood that there exists a permanent link between the visible world that we inhabit and the invisible world of the spirit ancestors; a link with those who have gone before us.  There is an understanding that these worlds rub shoulders with each other at all times, allowing the ‘ancestors’ to look out over the world of men and see what is happening today – even if they are only dimly perceived in their turn.
Many of the works in this exhibition, whilst drawn as an individual ‘tableau,’ combine together into larger diptychs and triptychs that show the interlocking realities of these different realms. As large monochromatic phantom ships sail towards African shores, loaded with spirits returning from the Caribbean, they intersect with another layer of reality inhabited by a living flock of birds, picked out as negative white silhouettes as they fly in front of the colourful sails of the spirits’ family crests. Another tableau depicts the floating world of the Egungun spirits, who find their naked bodies redrawn in the distinctive, symbolic, tribal patterns that mark them out as belonging to particular families as they soar above the world of men. These colourful spirits sail in a chaotic space, to be discovered as you identify a hand, a head or leg then slowly decipher the whole - the attached torso and remaining limbs all tangled, float freely in a trompe-l’oeil world that seems to defy sense as much as it does the laws of gravity.

Sinzogan’s vision, like these complex interpenetrating portraits, is both subtle and extensive, and the totality takes time to piece together. The result, however, even given his uncompromising regard for the grim realities of those darkest times of history, is both affirmative and - somehow – incredibly uplifting. 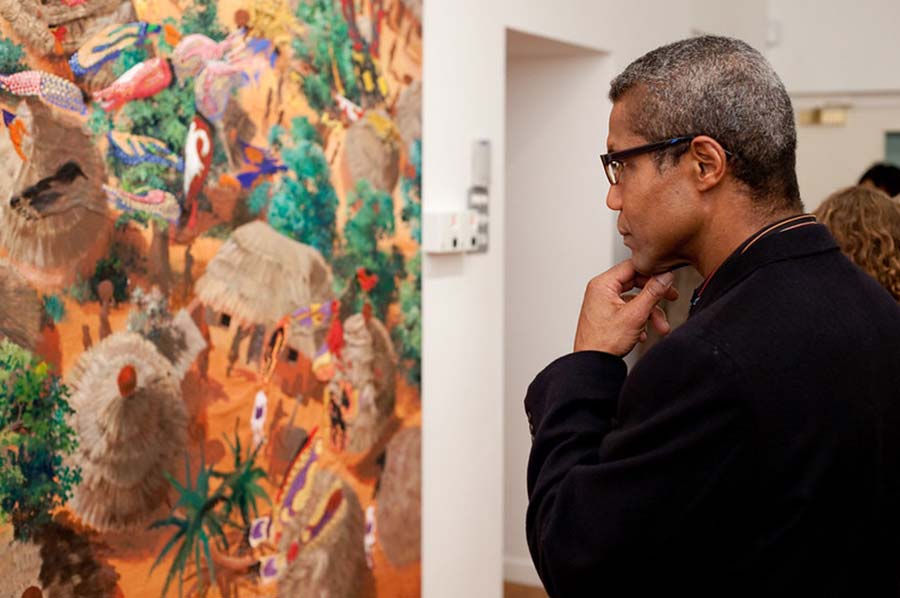 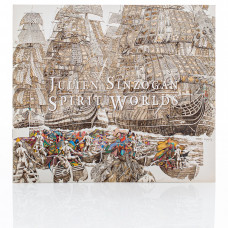