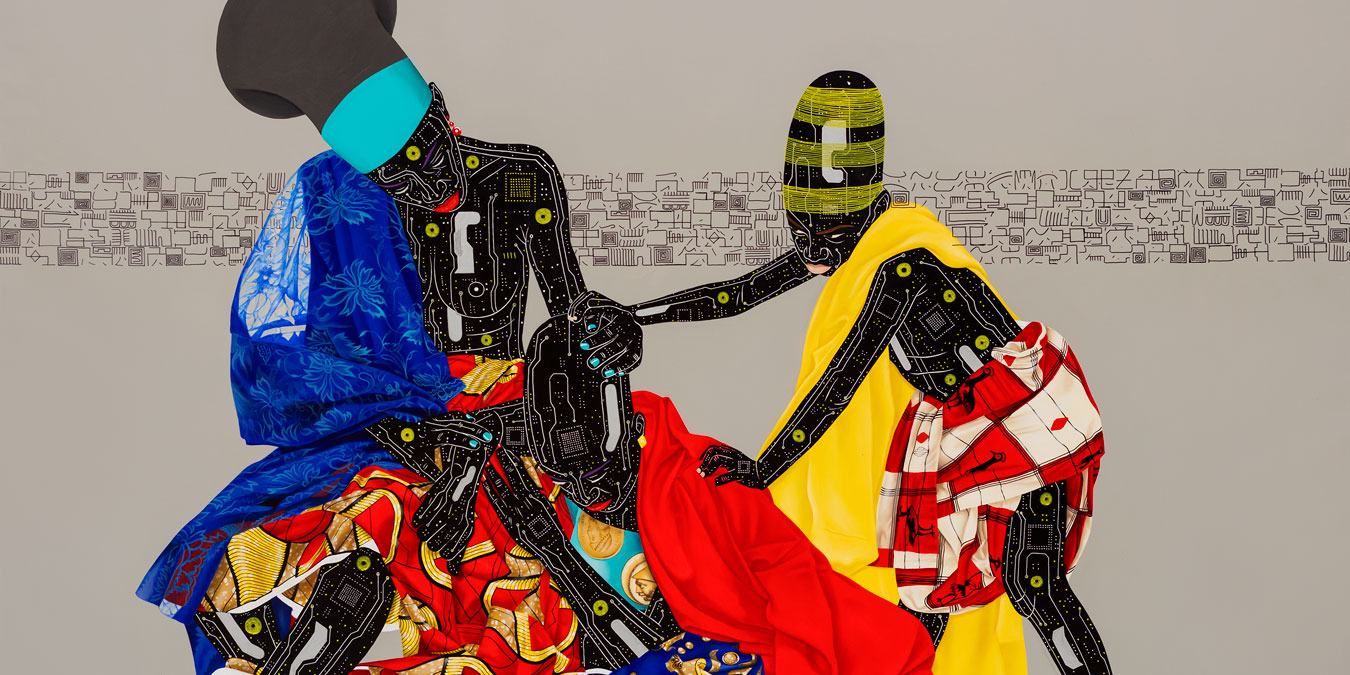 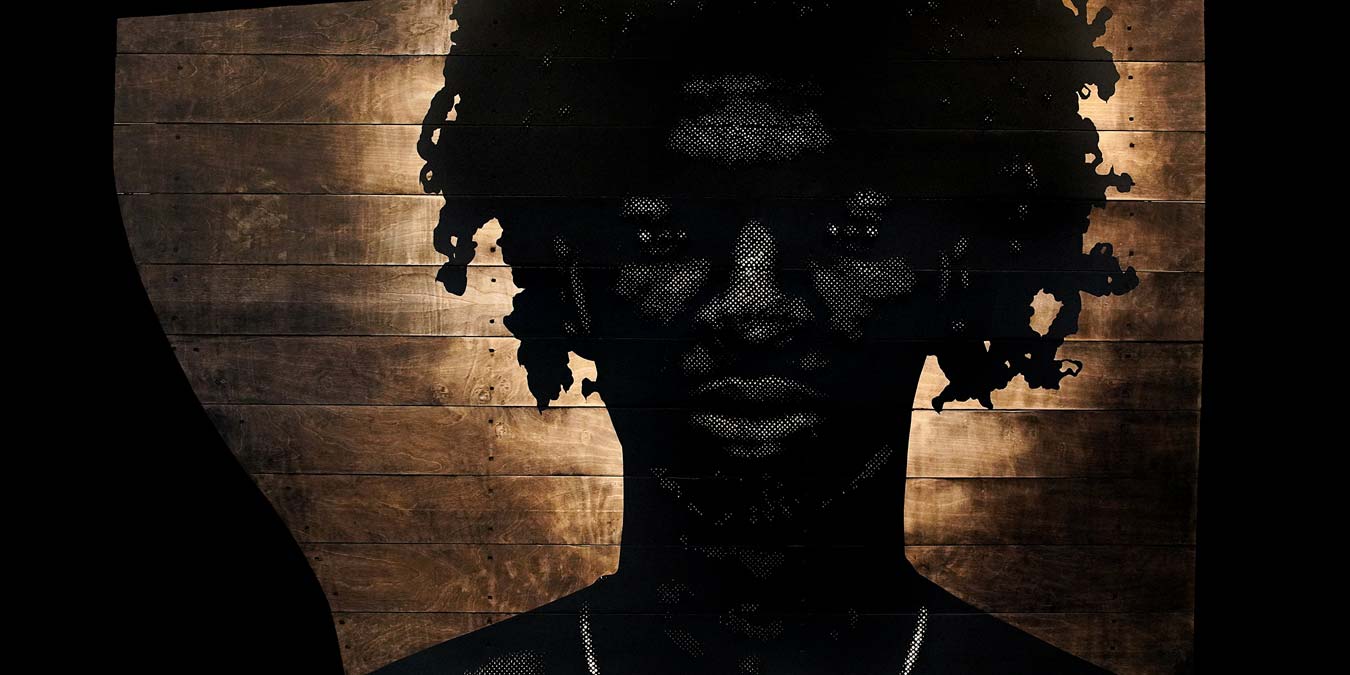 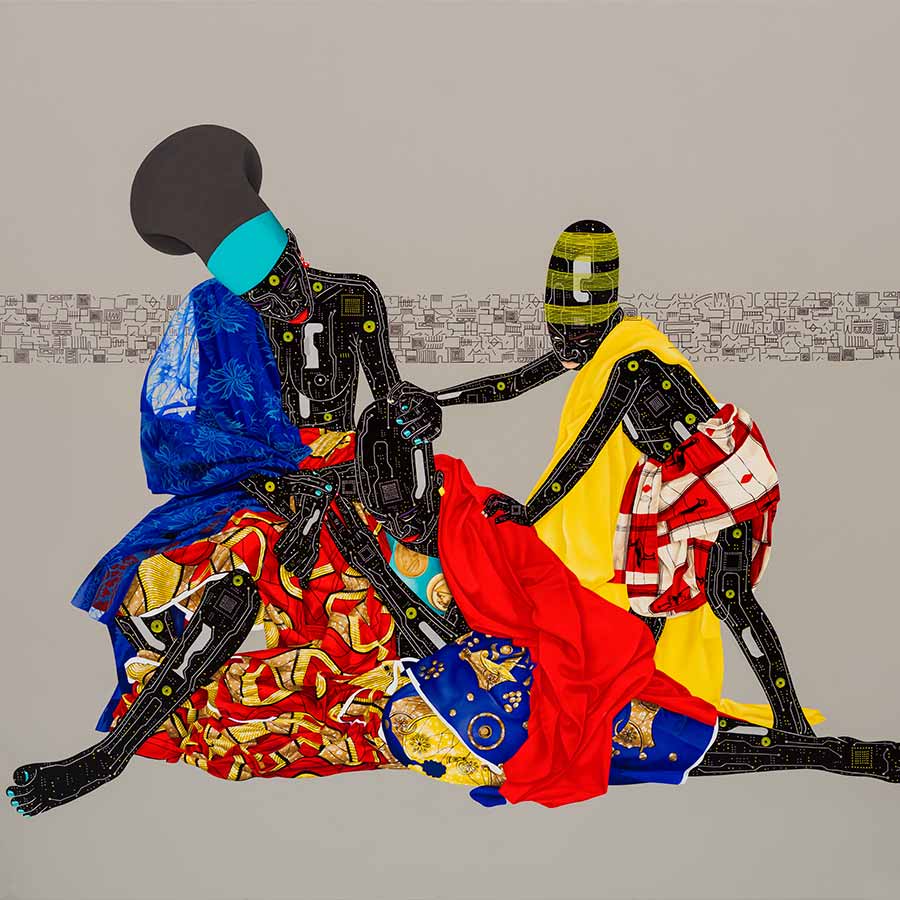 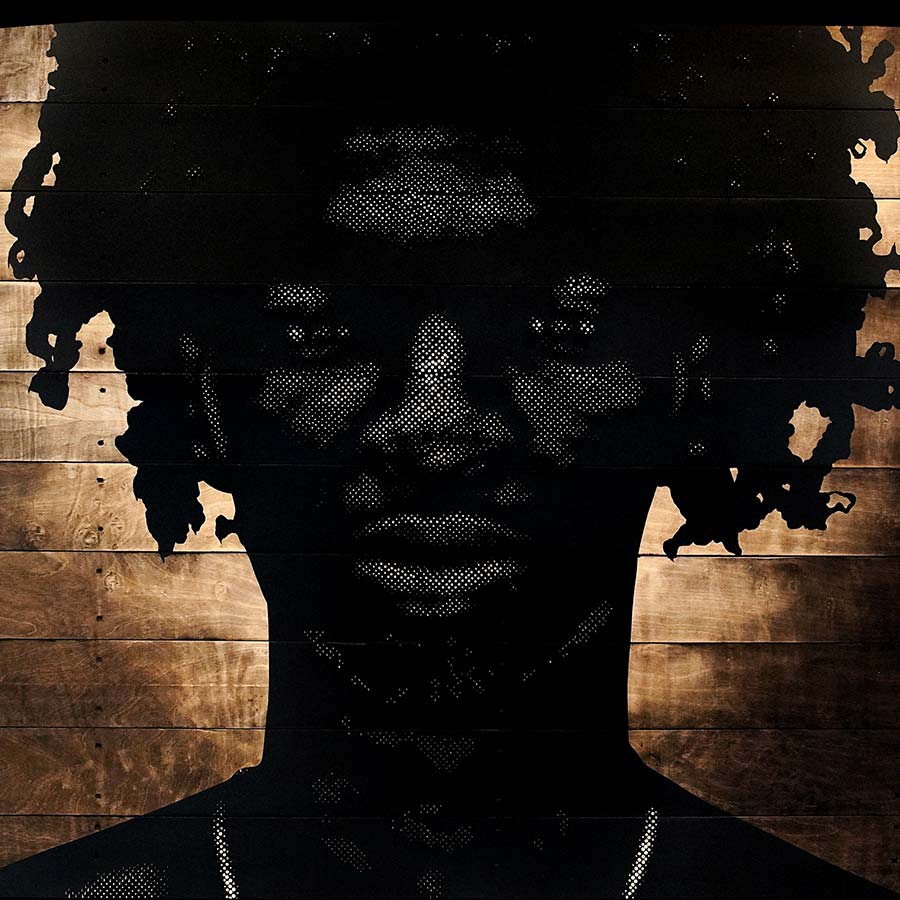 "This exhibition explores the agony and ecstasy of the globalised 21st century"
— Jonathan Jones, The Guardian, 6th September, 2019

Romuald Hazoumè (b. 1962, Porto-Novo, Benin) is one of Africa’s foremost contemporary artists and recipient of the prestigious Arnold Bode Prize at documenta 12. The artist’s astute and sardonically political oeuvre is realised in a diverse range of media. Hazoumè undertakes monumental installations that act as metaphors of African place, history and identity.

Eddy Kamuanga Ilunga(b.1991, Kinshasa, Democratic Republic of Congo) explores the seismic shifts in the economic, political and social identity of the DRC that have taken place since colonialism. His large-scale figurative compositions possess a depth of historical understanding, with a striking and sophisticated interplay of the intensity of space juxtaposed with emptiness.

Cyrus Kabiru (b.1984, Nairobi, Kenya).  is best known for his intricate, handmade eye-wear sculptures created from found materials and their accompanying self-portrait photographs. In Kabiru’s photographs, it is always the artist himself, wearing his ‘C-stunner’ creations, as if continuing his observation of everyday life from an extraordinary position.

Zak Ové’s (b.1966, London, of Trinidadian descent) practice includes sculpture, film and photography. His work is informed in part by the history and lore carried through the African diaspora to the Caribbean, Britain and beyond. Ové’s artworks explore the interplay between old world mythology and what he posits as ‘potential futures’, a space where he reinterprets existence into the fantastical.

Alexis Peskine’s (b.1979, France of Afro-Brazilian/Russian descent) signature works are large-scale mixed media ‘portraits’ of the African diaspora, which are rendered by hammering gold leafed nails of different gauge, with pin-point accuracy, into stained wood. Peskine depicts figures that portray strength and perseverance, with energy startlingly reminiscent of the Minkisi “power figures” of the Congo Basin.

In her sculptures, LR Vandy (b.1958, England, of Nigerian/Irish descent) brings together both found and made objects in order to create new meaning. Vandy transforms model boat hulls into ‘masks’, animating them with various materials, including fishing floats, porcupine quills and acupuncture needles. The hulls allude to the transportation of migrants as commodities.

Cosmo Whyte’s (b.1982, St. Andrew, Jamaica) work is defined by how the 21st century migrant can reconcile with a colonial past whilst shedding the burdens of nationalism and origin. Whyte employs photographs, drawings and sculpture to explore how notions of identity are disrupted by migration, as an unfinished arc of motion whose final resting point remains an open-ended question.
Related Items From Our Store