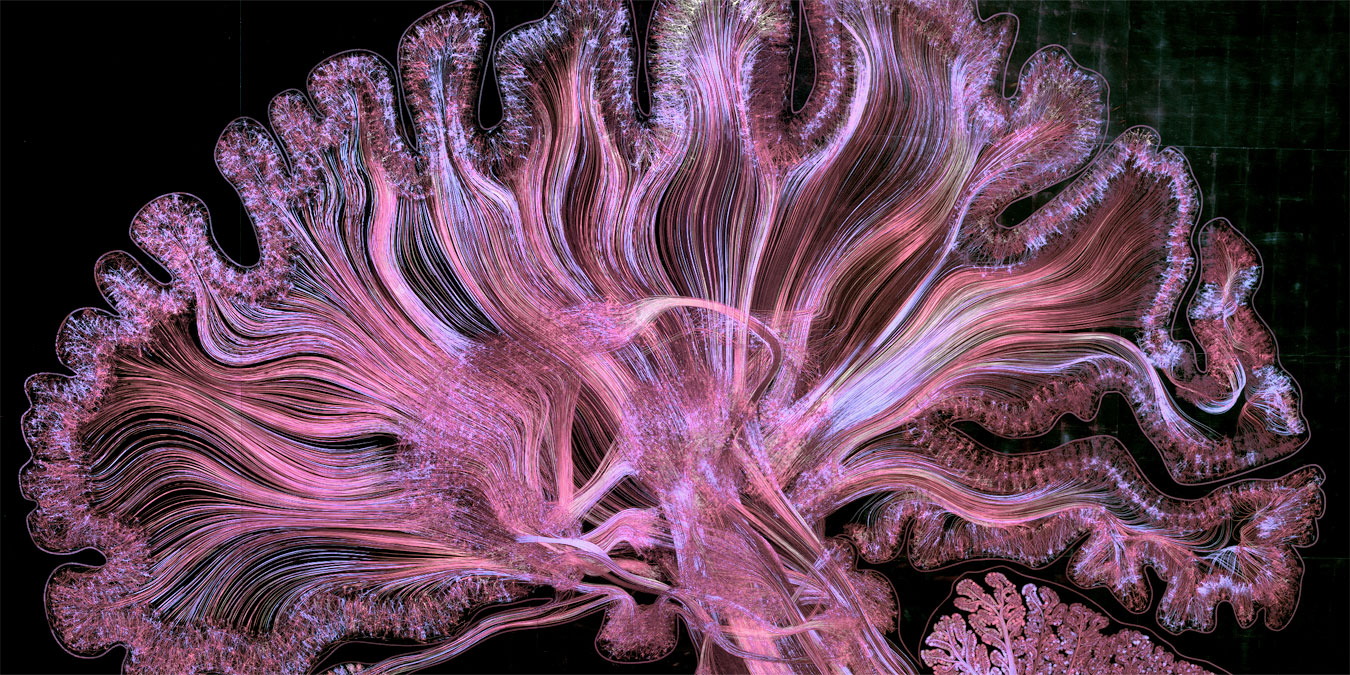 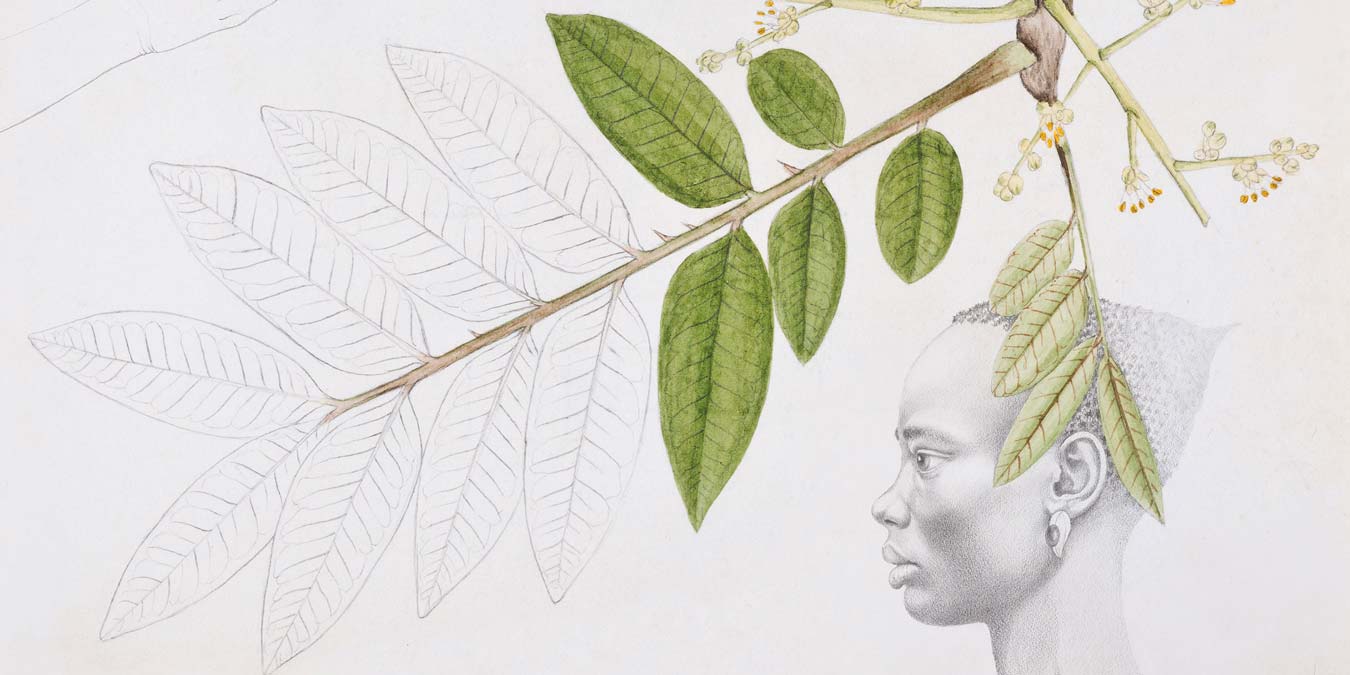 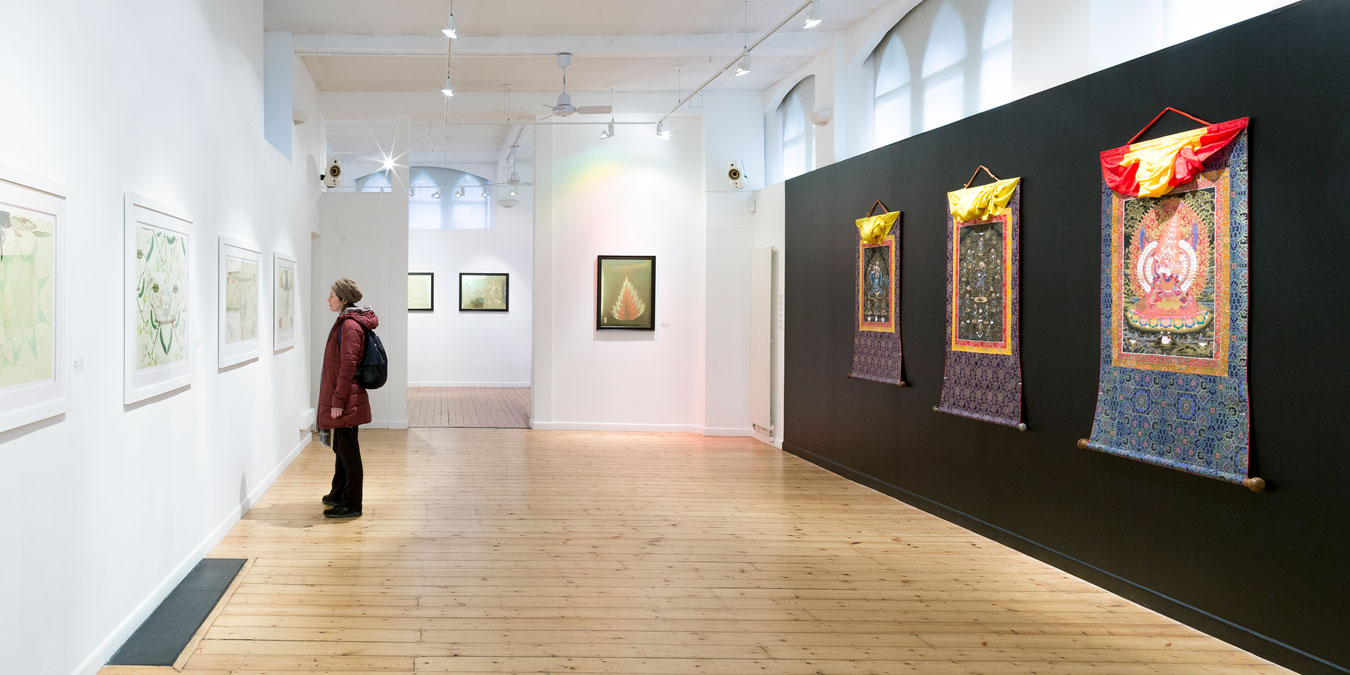 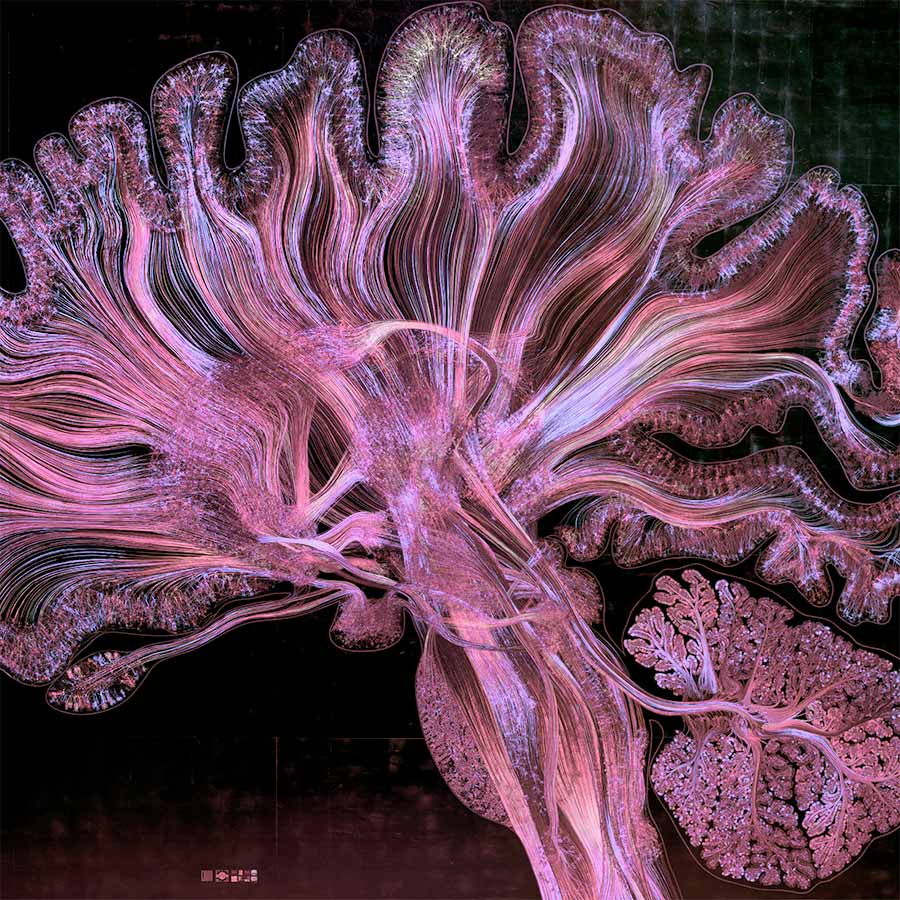 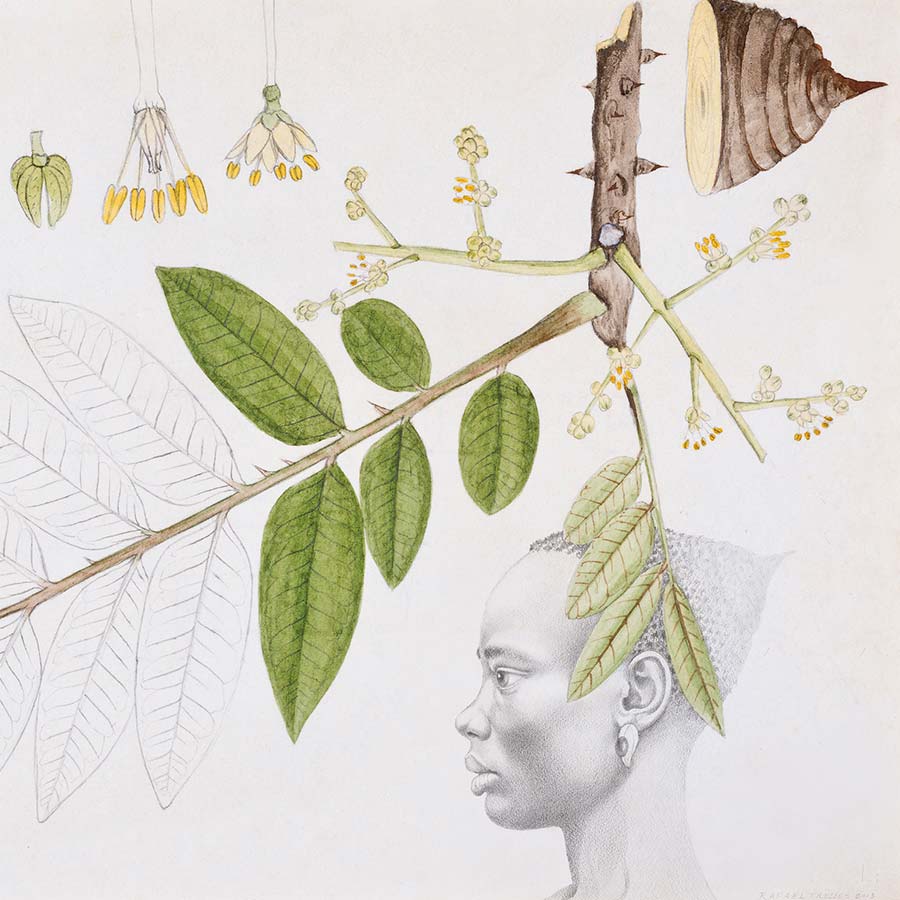 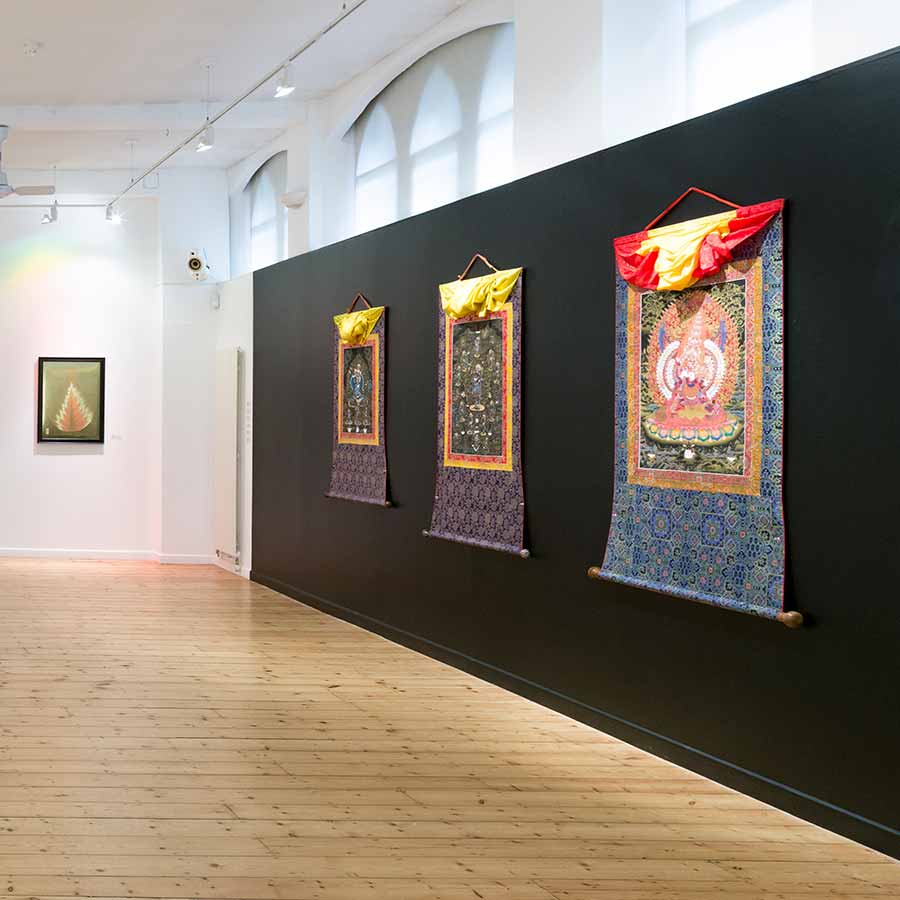 ‘In that particular state of attention called the naturalist trance, the scientific observer can begin to take in the totality of the life events occurring around him, and receive insights into its patterns and mechanisms. It sounds mystical, but it isn’t; it is partly science, partly art.’

An intriguing new exhibition of works by Greg Dunn,
Rafael Trelles, Rithika Merchant, Pablo Amaringo, Chewang Dorje Lama and Ralo Mayer. Recent findings in systems neuroscience seem to imply that the human brain itself creates – in a kind of controlled hallucination – the ‘reality’ within which it thinks it exists.  Using the twin prisms of art and science, Portal presents a gateway through which to examine how trances, visions and dreams manifest in human consciousness, becoming the raw material that both artists and scientists interpret.  Each exhibiting artist offers an invitation to re-open Blake’s ‘doors of perception’ and contemplate the infinite potential offered by the creativity of the human mind.

At the focal point of Portal sits the work of the artist, Greg Dunn whose work begins and ends with the human brain.  Dunn, who also holds a PhD in neuroscience, uses computationally advanced renderings to create golden micro-etchings that mimic the astonishingly complex beauty and reveal the intricate pattering of neural networks found in brain tissue.  Using coordinated coloured lighting these static works can also be animated to replicate the activities of the functioning brain, as portrayed in his striking film sequences.  These apparitions suggest the amazing activities occurring in the 1200 gms of grey matter within each of us, and these ghosts in the machine are responsible for generating the illusion of ‘consciousness’ and the fantastic ‘reality ‘ of our surroundings.

In a series of works called Flora, Rafael Trelles invites the viewer into a naturalist trance.
Trelles, who lives and works in Puerto Rico, developed the technique of combining naturalistic drawings of flora and fauna in ways that suggest overtones of ethereal significance.  His paintings are suffused with hints of hidden insight and awareness.

Rithika Merchant weaves together figures borrowed from old botanical drawings with icons and emblems common to many cultures. She creates enchanting works where myth, history, fact and fiction all collide in surprising yet meaningful ways.  The results of this dense intertwining of plant and animal figures reach back towards a collective unconscious of shared narratives and cultural values.

The richly illustrated ‘visions’ of Peruvian shaman, Pablo Amaringo, need little introduction.  Over many years, Amaringo set down in glowing detail the complex visualisations he experienced whilst exploring the liminal edges of consciousness induced by drinking ayahuasca, the ‘sacred vine’ of the Amazon jungle.  Otherworldly visions are similarly presented in the exquisite paintings of Chewang Dorje Lama.  This Nepalese master makes painstaking use of fine sable brushes to transform his pigments into the vibrant colour and intricate patterns particular to the school of Vajrayana Buddhism. This tantric tradition has inspired a form of art, whose primary goal is to communicate esoteric teachings through an immediate vision of enlightenment.  Portal will include a rare series of ‘Black Wrathful Deity’ thangkas selected by the artist Robert Beer, one of the foremost western authorities on Tibetan Buddhist thangkas.

Austrian artist Ralo Mayer presents an essay film exploring the boundaries between technology and ecology. One sequence of “Extra-Terrestrial Ecologies” uses advanced imaging techniques based on neural networks. Here solid-state circuits interpret and recompose the images the machine ‘sees’, generating emergent new realities that (perhaps!) mirror the ways in which the human mind dreams into existence the world in which it imagines it finds itself.

Finally, Portal returns to cutting-edge scientific research about the brain itself, presenting digital prints and a film describing the Blue Brain Project, the most ambitious brain simulation project to date. Based in Lausanne, Switzerland, this collaborative, multidisciplinary effort harnesses the best available minds from around Europe to create comprehensive digital reconstructions of the functioning human brain. To model the enigmatic complexity of 100 billion neurons interacting amongst themselves huge resources have been dedicated to this innovative research project since 2005. This ultimate example of imaginative introspection channels the musings of some of the finest, specialist minds through the latest supercomputer technology yet devised to create an approximation of the functioning of neocortical columns in the human brain. In a curious feedback loop, the understanding of brain architecture will help design the next level of supercomputers. As technology strives to imitate biology, it confirms the astonishing sophistication present in each human head. That most mysterious structure in the known universe, the human brain, still struggles to imagine the enormity of its own complexity.