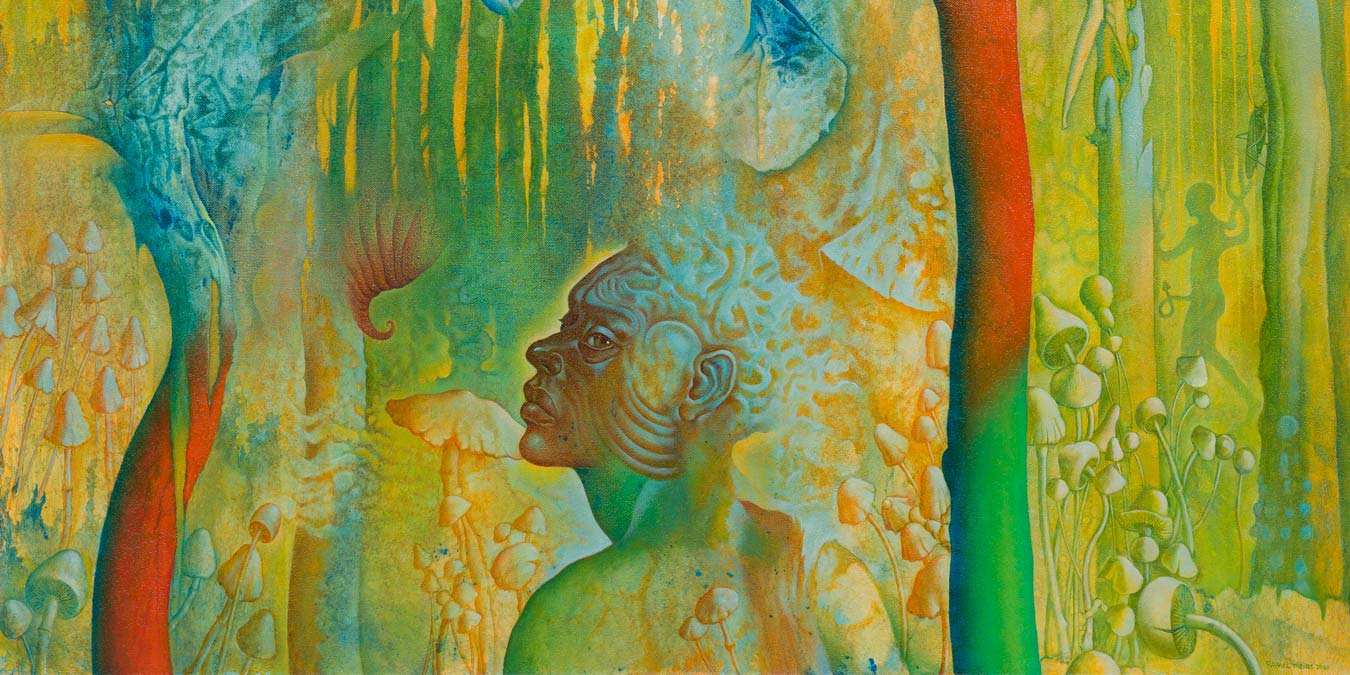 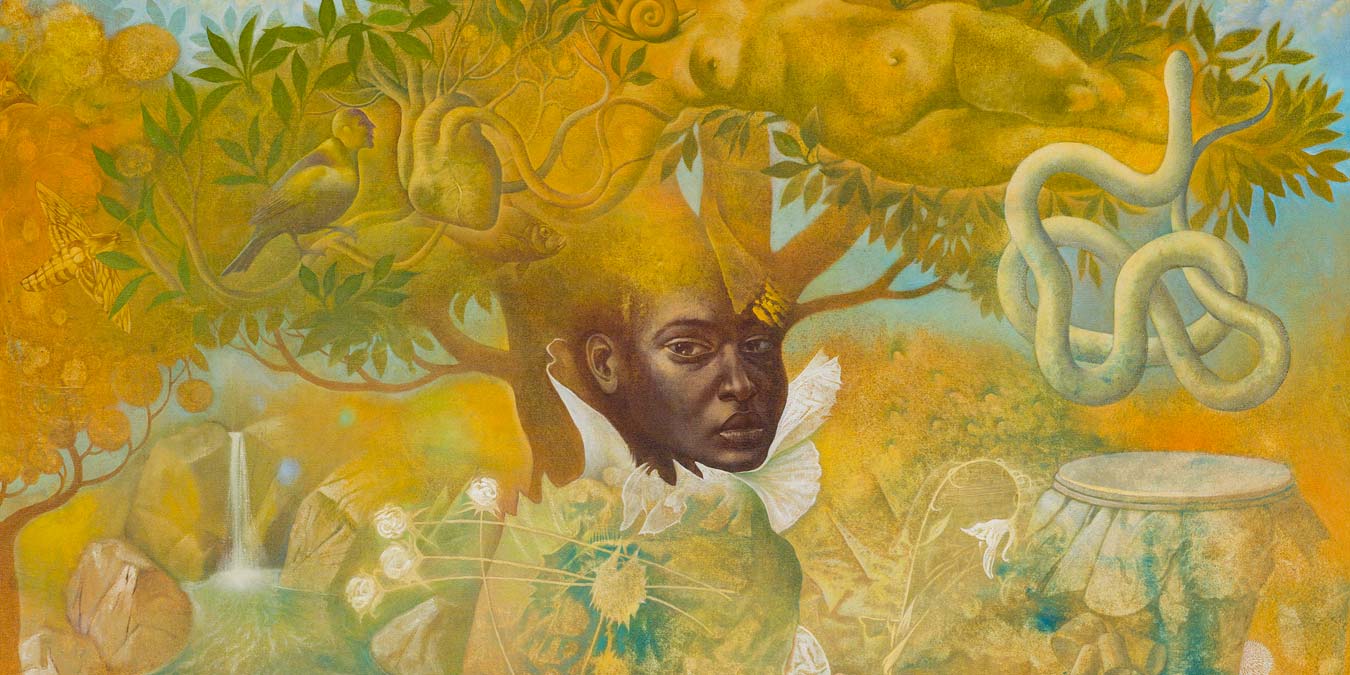 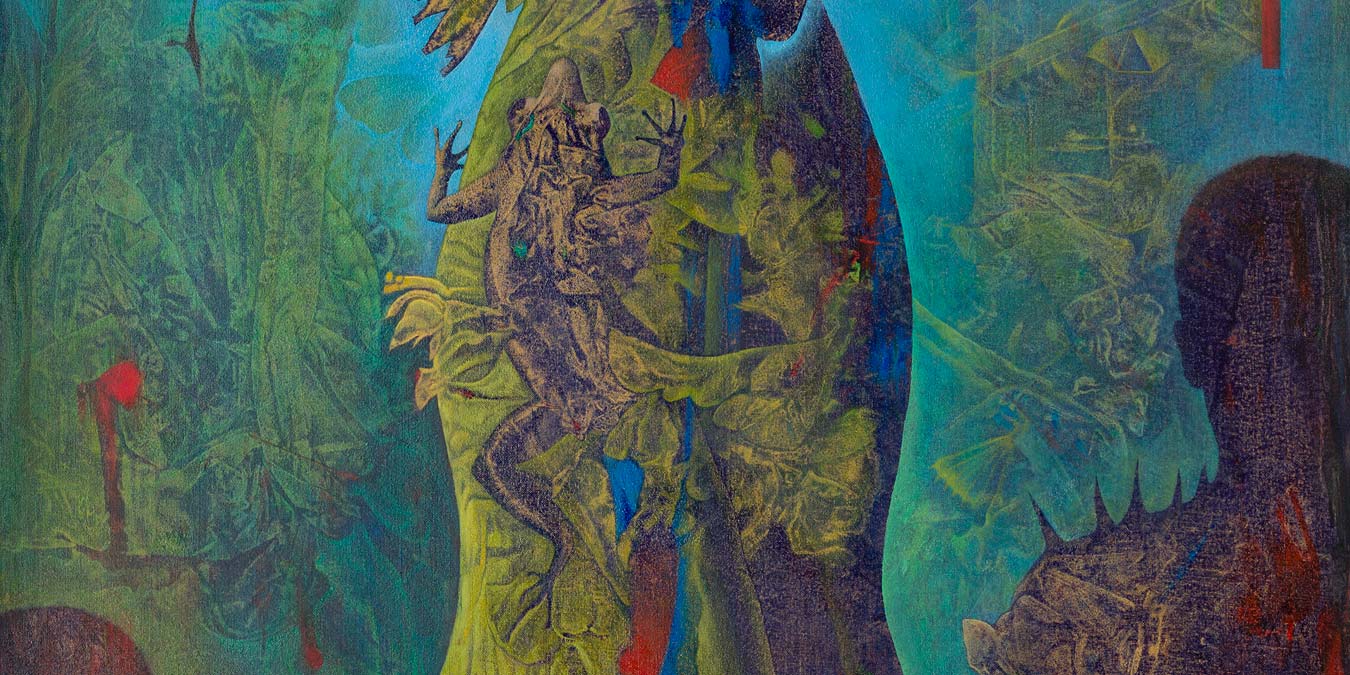 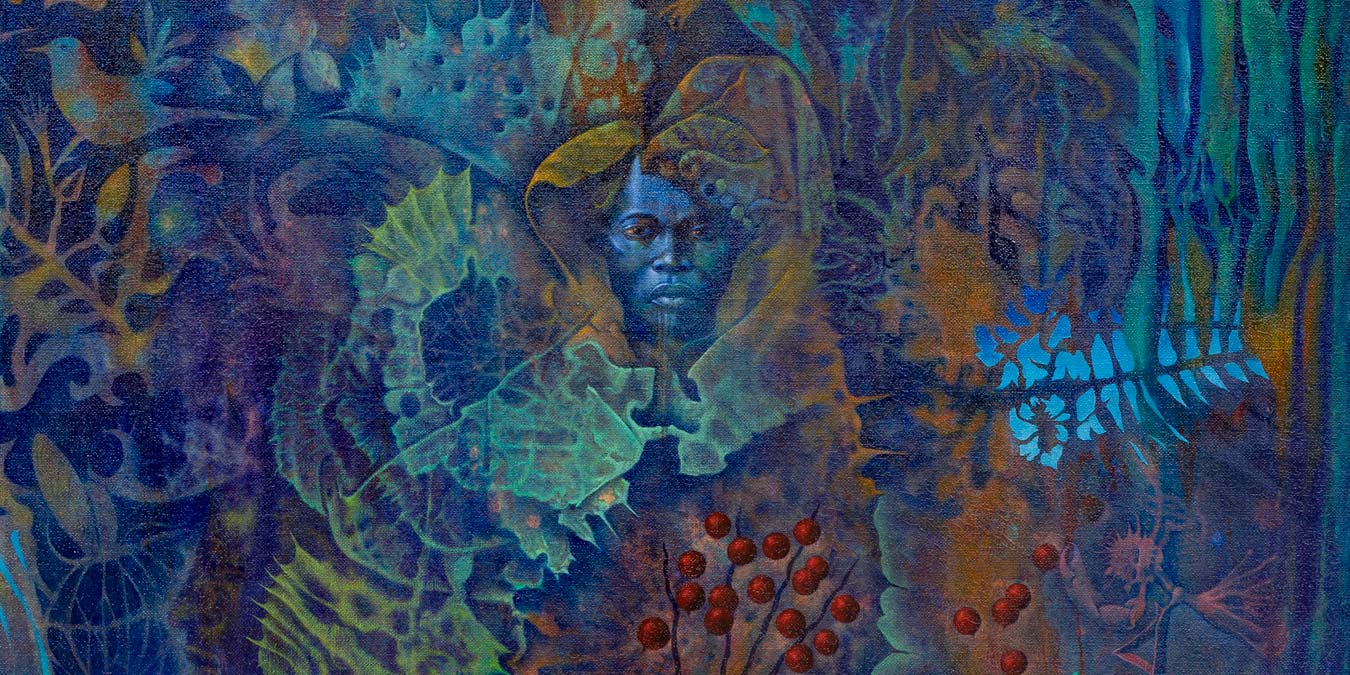 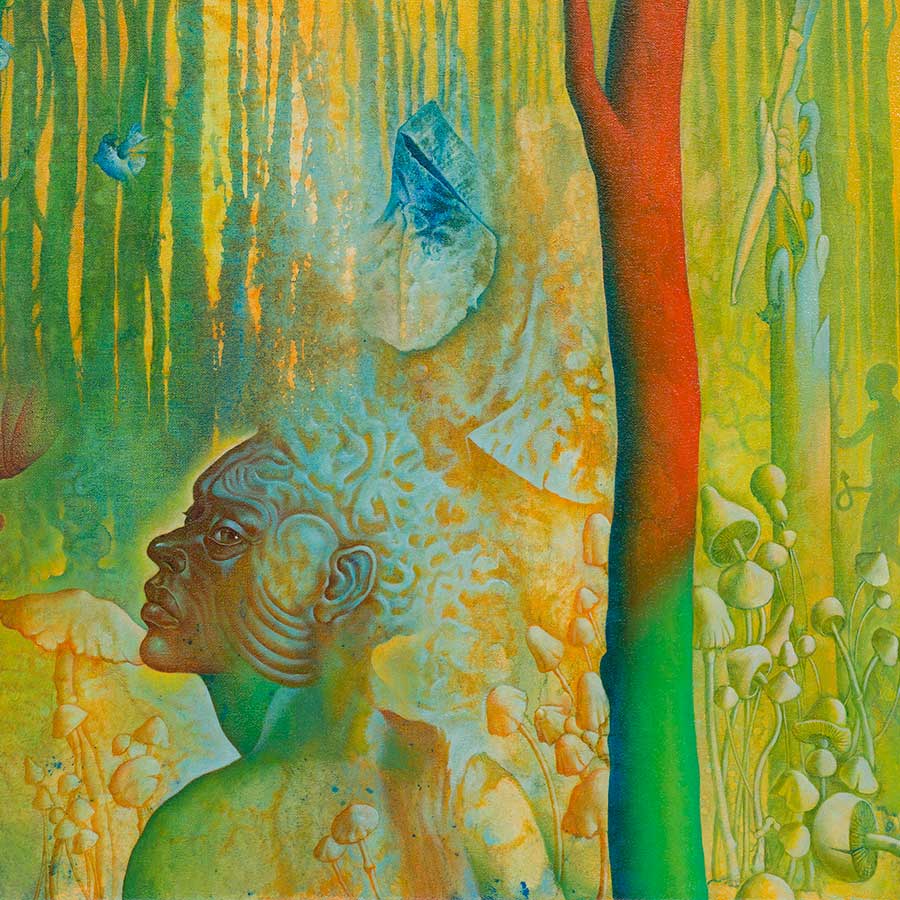 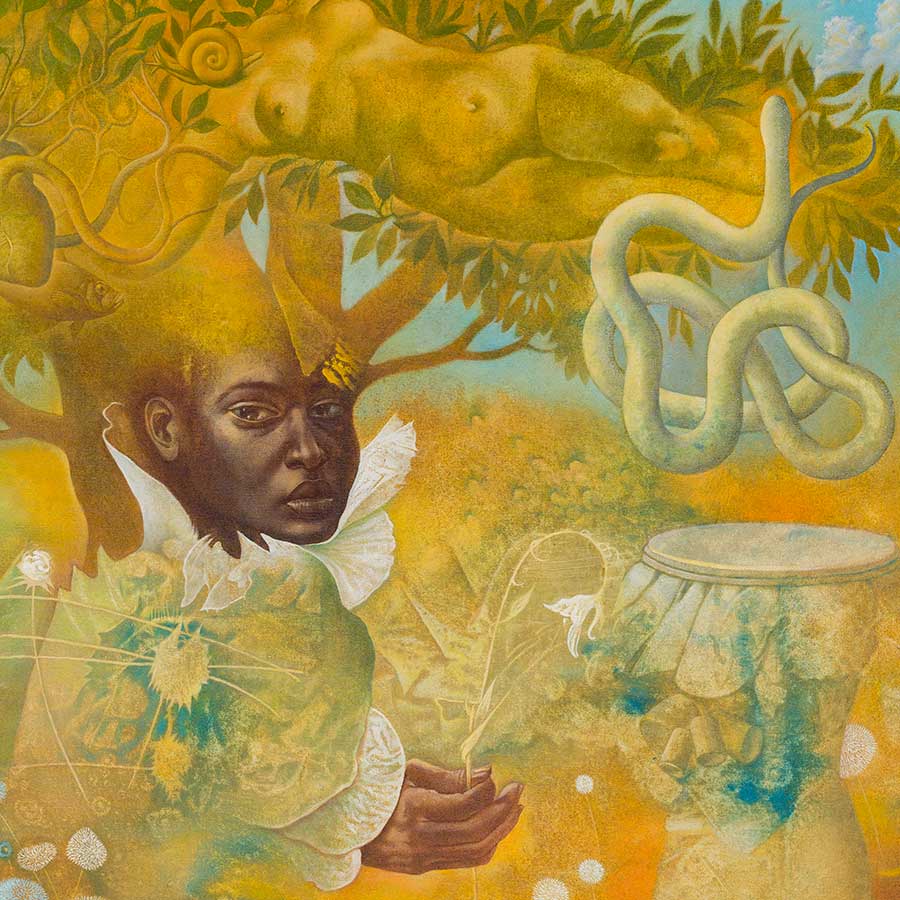 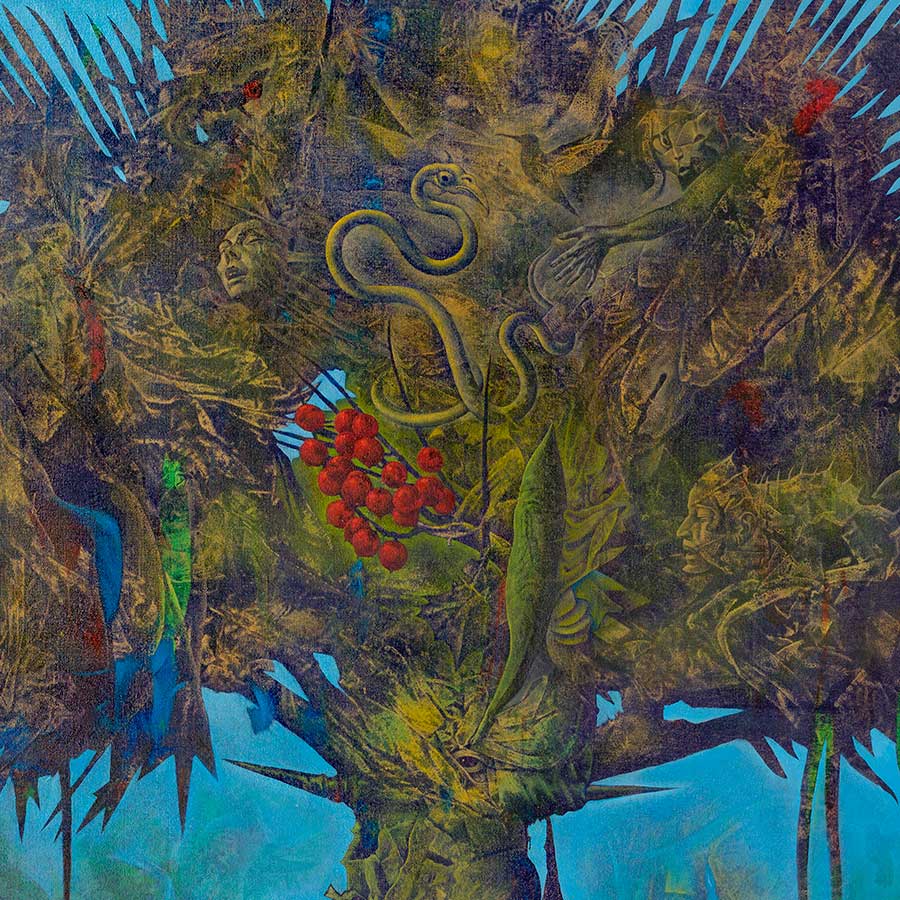 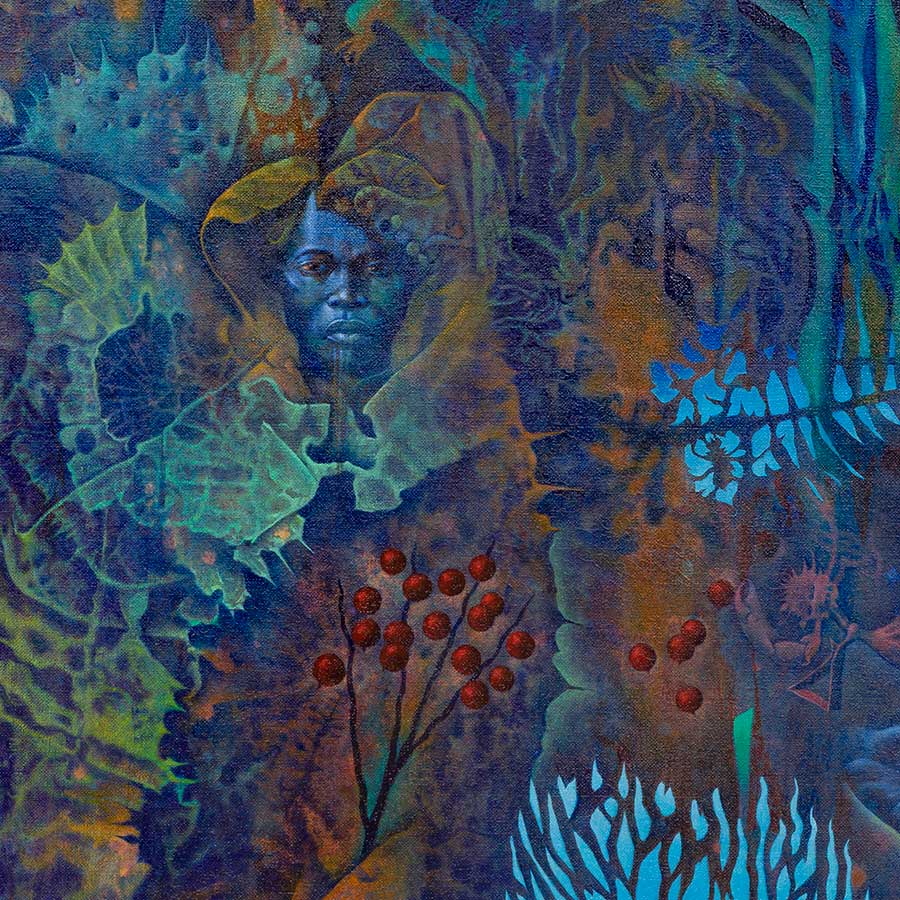 In this first solo exhibition of new works by Rafael Trelles, which will open in June 2021. His new paintings explore the notion of the Axis Mundi, a mythic tree that represents a portal between this and other worlds.

In 2018, Rafael Trelles exhibited a set of exquisitely hand-drawn works, depicting mysterious, magico-mythical realms, as part of October Gallery’s Portal show. His latest solo exhibition, entitled Axis Mundi, presents a newly completed series of mixed media paintings that develop similar themes in novel and unexpected ways. The exhibition’s title refers to that central ‘world tree’ around which the universe supposedly revolves. This notion, common to many ancient cultures in Africa, the Americas and Europe, situates a giant tree at the centre of some ageless, sacred wood. One example, from the Norse sagas, tells of the great ash tree, Yggdrasil, which from its topmost branches to its deepest roots connects nine different realms, passing from the heavens to earth before plunging down into the underworld below. Trelles’ haunting paintings present themes linking the enchanted forests of his native Puerto Rico with these widespread beliefs that see forests as sites of refuge and transformation in a natural world increasingly challenged by crises of species extinction and climate change.

Every painting in the Axis Mundi series was realised in a two-step process adapted from a technique popularised by the Spanish Cubist, Oscar Dominguez. Known as decalcomania, the technique was adopted by Surrealist artists such as Max Ernst and André Breton, who were interested in letting the unconscious manifest in their works by using spontaneous or automatic techniques. Initially, layers of coloured acrylic paint are spread across the canvas. Before the paint dries, Trelles uses crumpled cloths to impress the painted surface creating a series of arbitrarily patterned effects. When repeatedly worked over in this way the resulting canvas becomes an abstract stain of entirely random forms. This then becomes the ambiguous ground on which Trelles first discovers then defines emerging forms, which he further highlights with conventional painting techniques in oil. The canvases resulting strike a balance between elements originally generated by unconscious impulses and the artist’s conscious refashioning of those forms into figures of significance. Trelles insists that while, inevitably, he is the first spectator to be startled by the interplay of portents looming out of the depths, he may well be the last to understand their implications.

Confined to his studio in San Juan during the year of the global pandemic, to Trelles, the initial forms arising through the layers of paint appeared as archetypal trees of the island’s ancient forests. Those tropical forests full of precious hardwoods like mahogany, are still recovering from the catastrophic destruction caused by Hurricane Maria, in 2017. Similar natural disasters of wind, fire and flood have been increasing in force and frequency of late. As his revelatory paintbrushes outlined various abstract shapes, they metamorphosed into mythic figures from the legends of the indigenous Caribbean peoples and their sacred trees, the Royal Palm, the Ceiba and others. In later times, when enslaved Africans escaping from the brutal sugar-cane plantations sought refuge deep within those forests, the same sacred trees confirmed the protective presence of their own ancestral guardian spirits. The paintings arranged themselves into a natural sequence of visions of a dreamlike forest world, where humans, surrounded by elements of the animal, vegetable and mineral kingdoms, appear as integral parts of an ordered system. Half hidden spirit-figures also manifested, appearing as silent observers bearing critical intelligence of past, present and future crises that concern us all.

In describing his personal perspective, Rafael Trelles has said, ‘I am interested in creating metaphors that express the unity of the world, the relationship between nature and culture and the interdependence of all human beings with their surrounding natural environment.’

Raphael Trelles will be giving a Gallery Talk at October Gallery and livestream via Facebook on Saturday, 26th June, 2021, 15:00 - 16:30. Book your free place here.
View Artist Page
Related Items From Our Store 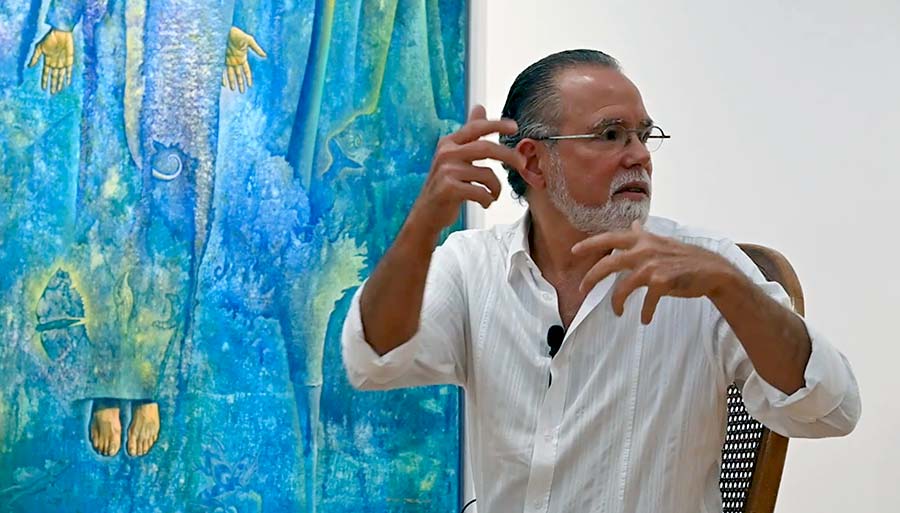 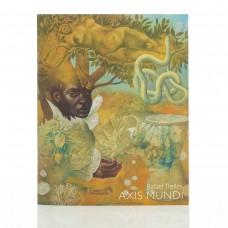