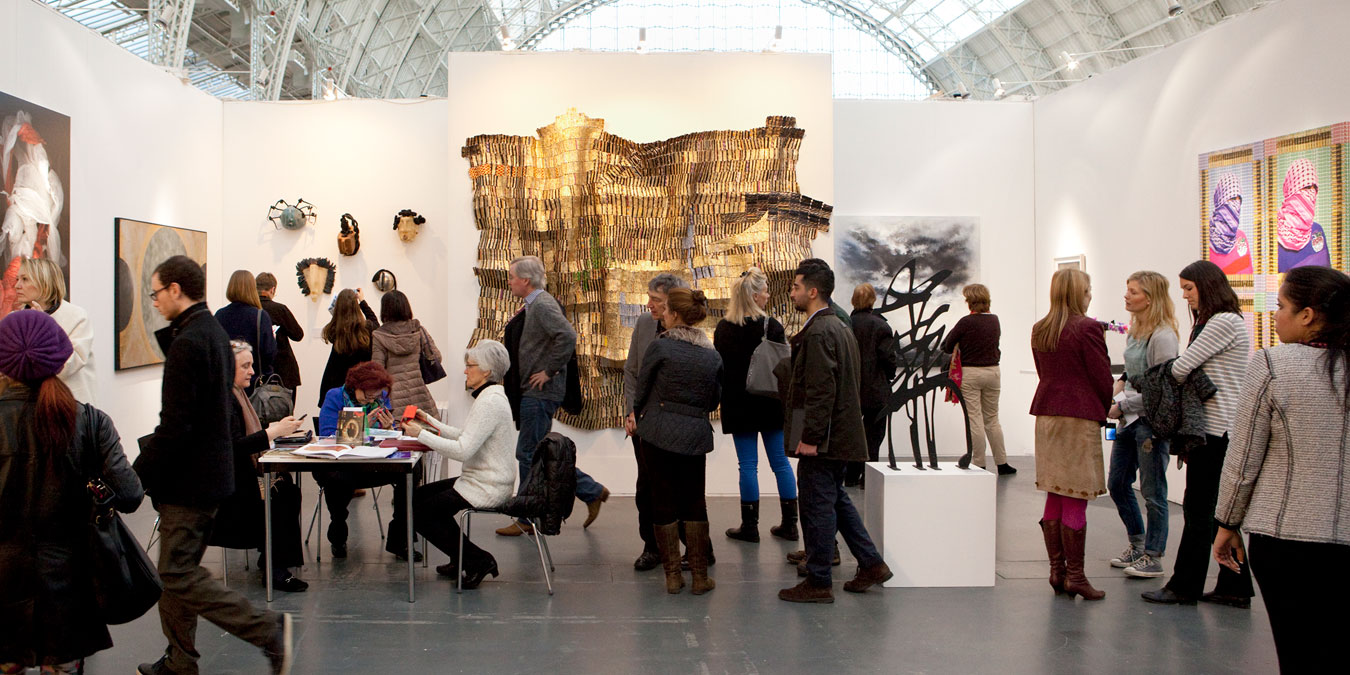 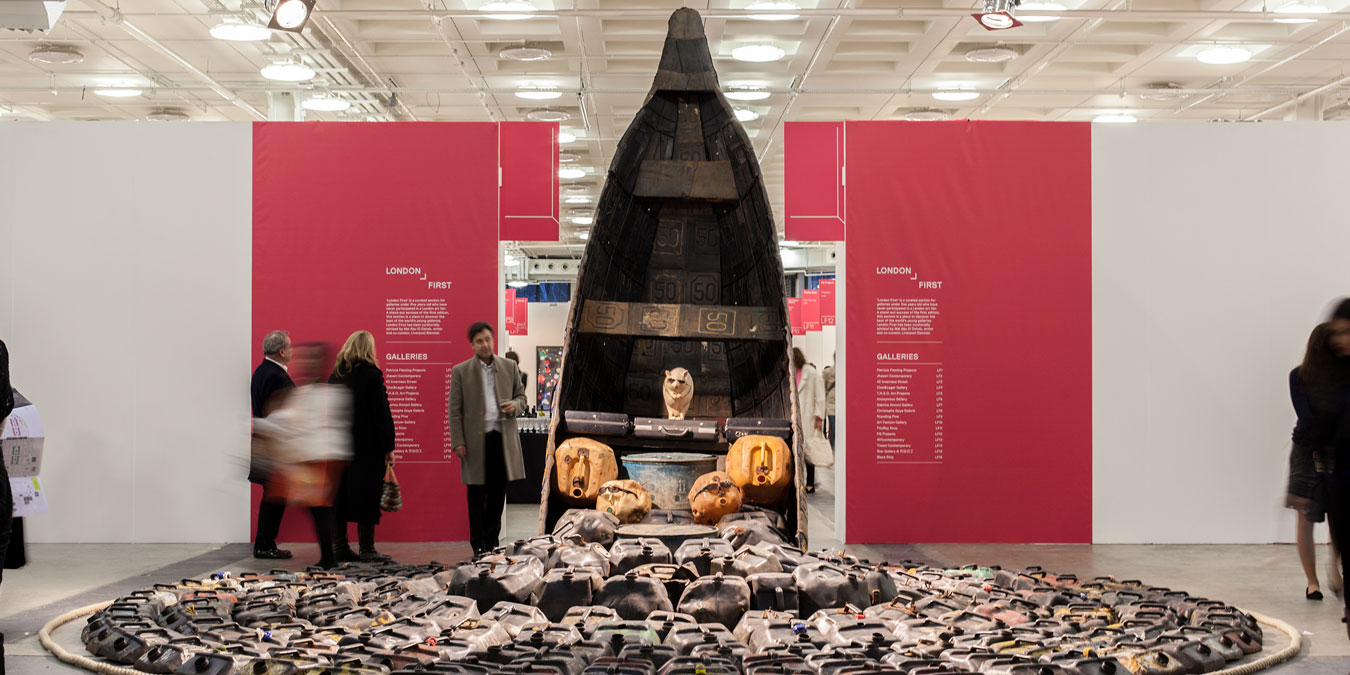 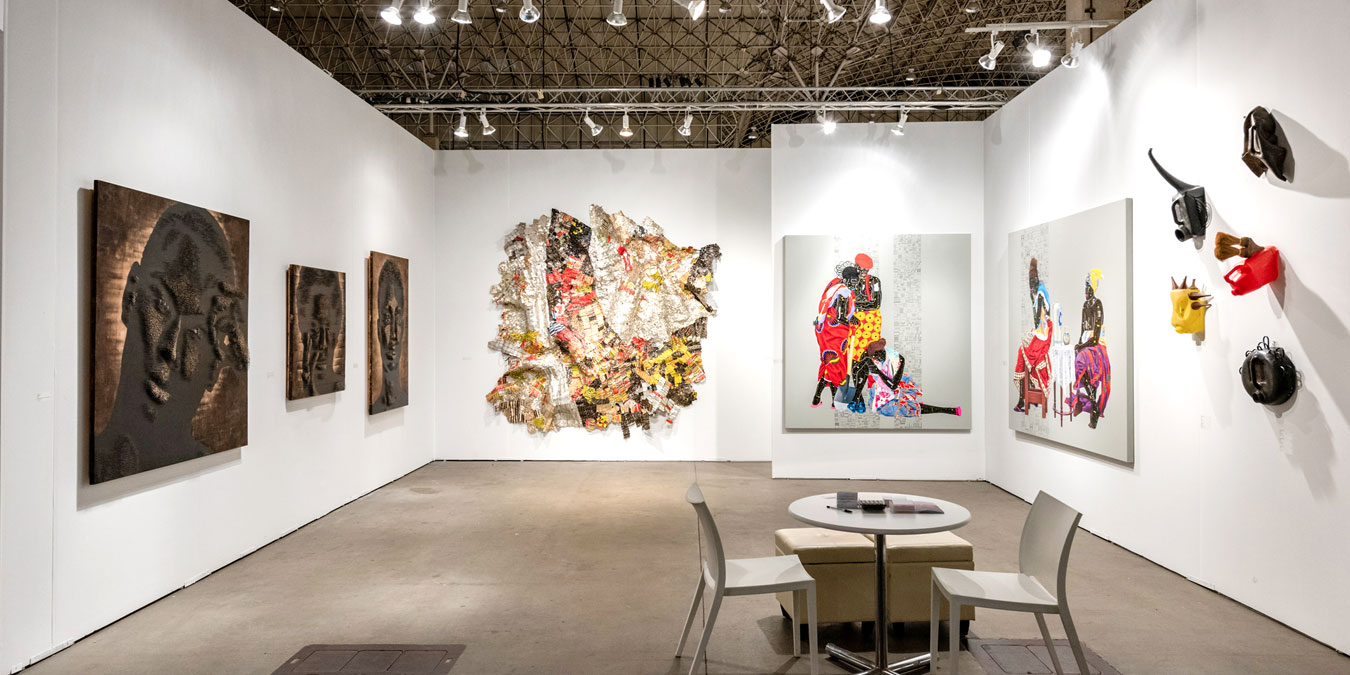 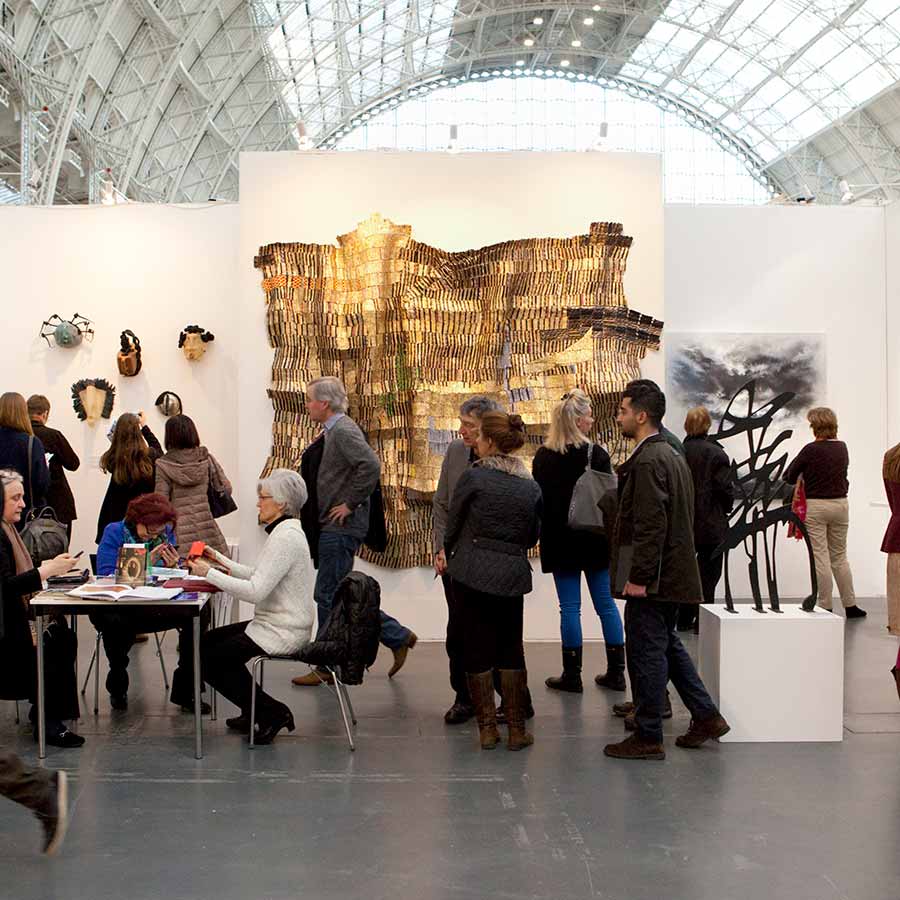 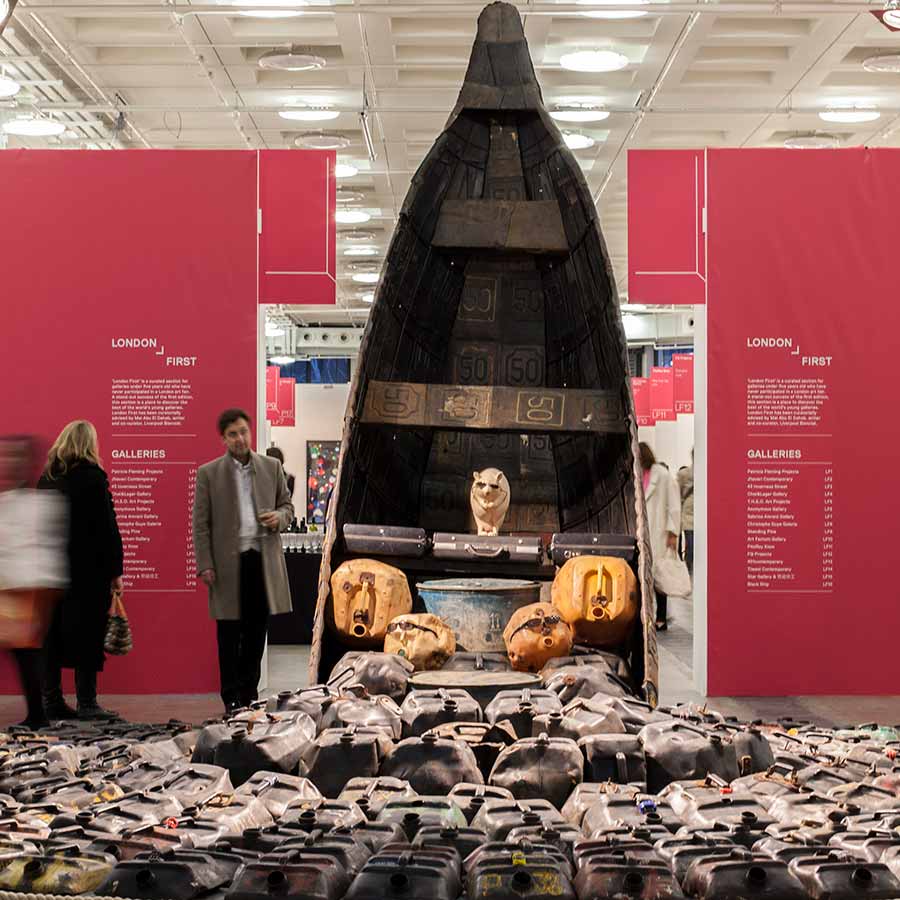 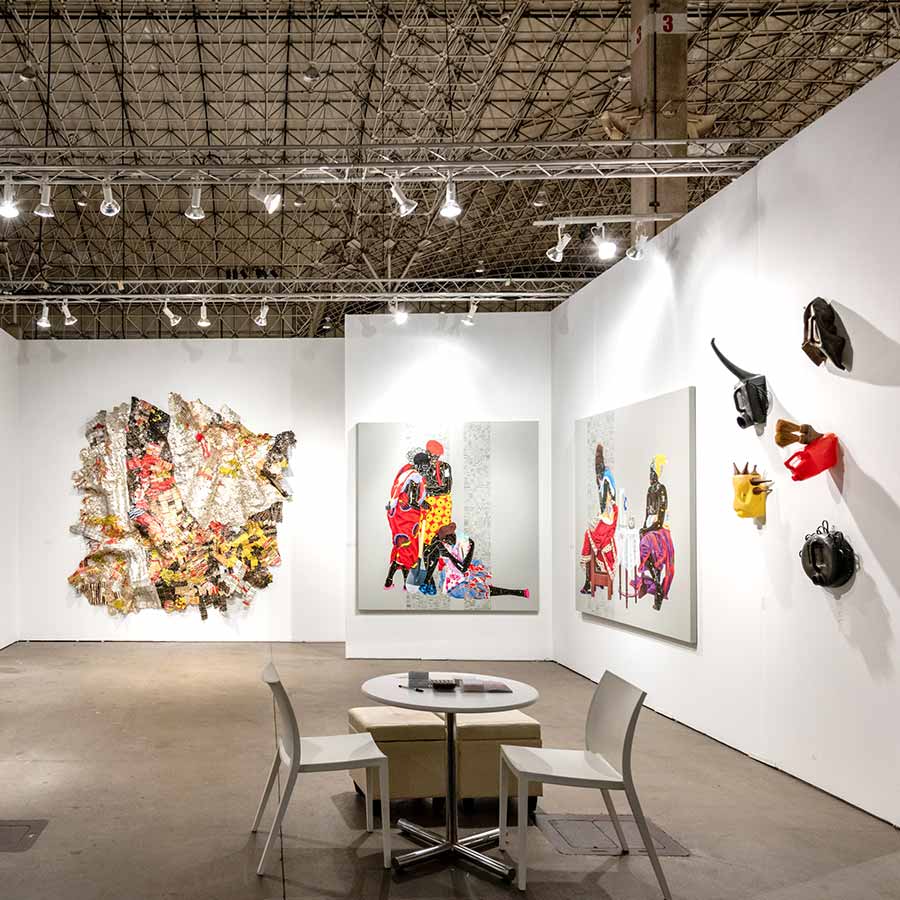 Image: Installation of El Anatsui: Triumphant Scale.
The touring exhibition Triumphant Scale is the most comprehensive and detailed presentation of El Anatsui’s oeuvre thus far. The exhibition encompasses all media used by the artist in his remarkable 50-year career, focusing on the triumphant and monumental quality of his sculptures, with the signature bottle cap series at the heart of the presentation. Along with these ambitious works, the exhibition includes wood sculptures and wall reliefs from the mid-1970s to the late 1990s; ceramic sculptures of the late 1970s; and drawings, sketches and prints.
View Artist Page

The fair will coincide with Alexis Peskine: Fire Figures, at October Gallery, a solo exhibition of new works by the artist.

For this edition of 1-54, LR Vandy has created a new installation which is a continuation of her 'Hull' series.

This year, Benji Reid was announced the recipient of The Wellcome Photography Prize 2020 for the category Mental Health (single image). Reid was awarded the prize for his work Holding onto Daddy a “love note” to his daughter.

Eddy Kamuanga Ilunga was recently announced as one of Apollo Magazine's 40 Under 40 Africa Artists.
Visit Website

JUKHEE KWON, THE LIGHTNESS OF A MOMENT

Image: William S. Burroughs, Warhol, A Portrait in TV Dots..., 1992. Spray paint on paper, 53 x 49 cm. Courtesy of the Artist's Estate / The Wylie Agency and October Gallery, London.
October Gallery, London presented an exhibition of William S. Burroughs’ art, including rarely displayed paintings and sculptures. Burroughs practiced visual art throughout his life, for decades he produced photographs, collages and film, then in his later years he became a prolific painter. This exhibition will address his legacy, showing highlights from the latter part of his career.

The virtual booth explored Burroughs’ interest in the relationship between word and image. Burroughs thought in images and symbols, this is visible in both his writing and paintings. He was influenced by process art, recombinant art, and incorporating text into paintings.
Visit Website
View Artist Page

Image: El Anatsui, Untitled (Carmine Eclipse), 2016. Intaglio print with collage and chine-collé, 98.5 x 98.5 cm. Edition 2 of 3.
Celebrating the 50th anniversary of the Apollo 11 Moon landing, The Moon is the UK’s biggest exhibition dedicated to Earth’s celestial neighbour. The exhibition reconnects with the wonders of the Moon through artefacts, artworks and interactive moments, and discovers how it has captivated and inspired us throughout history. Featured prominently in the exhibition was El Anatsui’s Cadmium-Vermillion Eclipse, an intaglio print with collage and chine-collé, produced in collaboration with Factum Arte, Madrid.
View Artist Page

GET UP, STAND UP NOW

Image: Installation of Get Up, Stand Up Now.
Get Up, Stand Up Now, curated by Zak Ové was a major new exhibition celebrating the past 50 years of Black creativity in Britain at Somerset House. A group of around 100 interdisciplinary artists showcased work together for the first time, including Alexis Peskine, LR Vandy and Aubrey Williams, in this survey of the Black experience and influence, from the post-war era to the present day.

Image: Installation of The Journey of Things.
This major exhibition brought together more than 50 of Odundo’s vessels alongside a large selection of historic and contemporary objects which she curated to reveal the vast range of references from around the globe that have informed the development of her unique work. October Gallery loaned the two-piece installation AG+BA by El Anatsui for inclusion in the exhibition.
View Artist Page

Image: LR Vandy, Superhero Cog Woman #01, 2019. Jesmonite and steel,
210 x 140 x 140 cm. Edition of 7.
Frieze Sculpture returned to The Regent’s Park for three months this summer, featuring works selected and placed by Clare Lilley (Director of Programme, Yorkshire Sculpture Park.) LR Vandy’s large Jesmonite sculpture from the series Superhero Cog Woman was exhibited as part of the sculpture park. Superhero Cog Woman is a tribute to the act of women coming together and making things happen. Each artwork from the series can be constructed from a range of cog-like components, differently configured, adding to its seemingly pragmatic and mechanical nature.
View Artist Page

Image: Installation of Iris by El Anatsui, (right).
The exhibition brought together some thirty contemporary African artists of 15 different nationalities and opened in Casblanca, from where it is touring to6 countries across the continent. Included in the Casablance leg of the exhibition was the bottle-top work Iris by El Anatsui.
View Artist Page

Image: Installation of reCollecting.
The Harley Gallery exhibited new works in an exciting solo exhibition by Sylvie Franquet. Enthralled by views on gender and nature, the artist collects materials brought together in an act of repairing humankind’s relationship with nature. Her punk aesthetic encompasses a range of fine art practices including needlework, sculpture and collage which she combined with research into Welbeck’s historic art collection.
View Artist Page