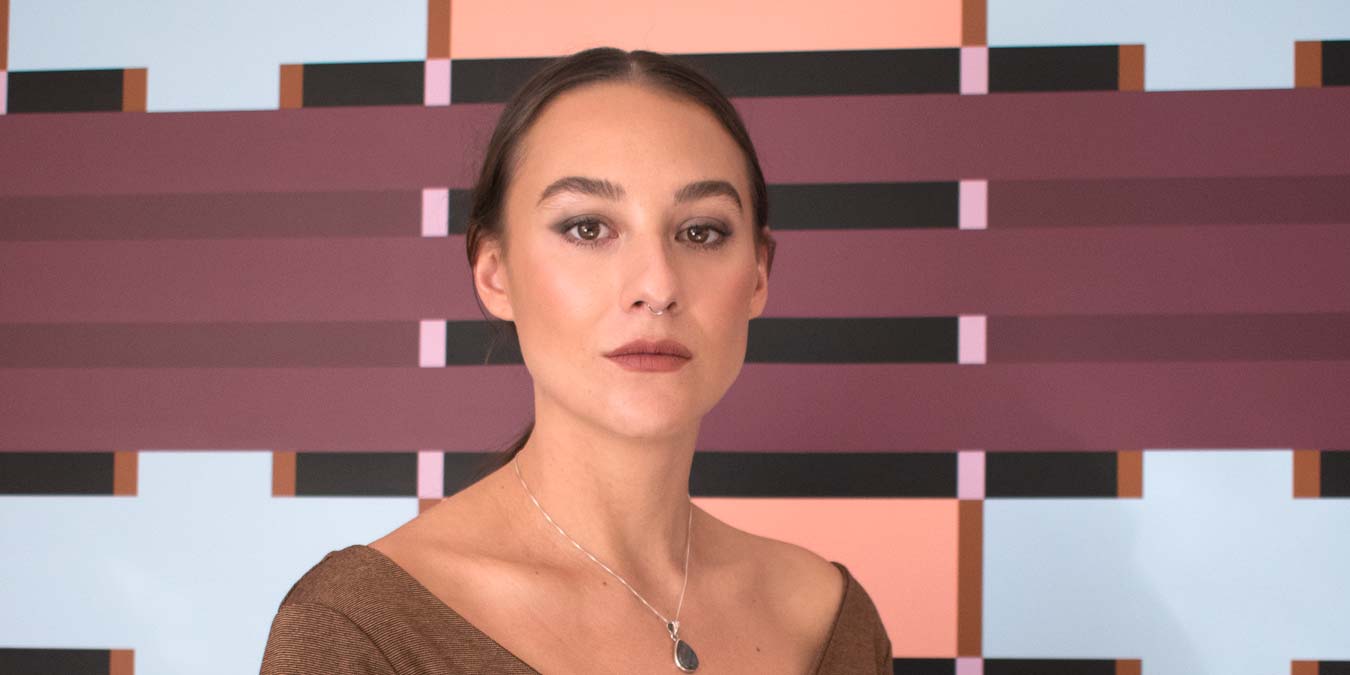 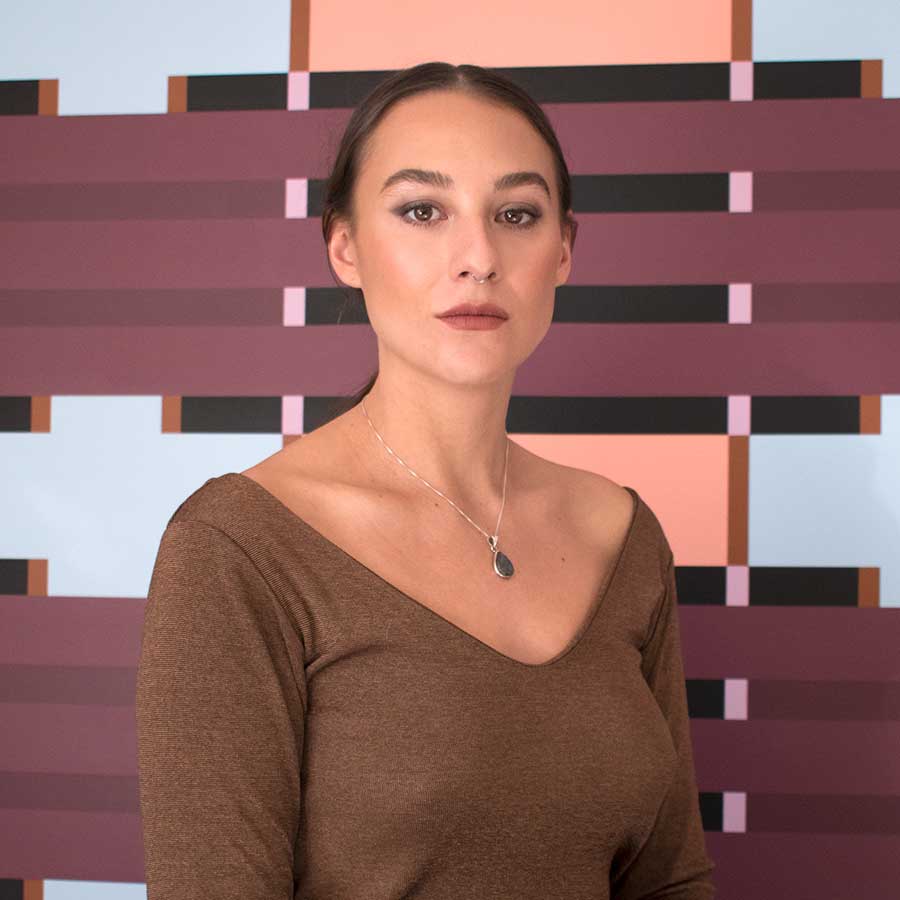 Gallery Talk:
Jordan Ann Craig
Artist Jordan Ann Craig will be in conversation with Dee Haughney, October Gallery curator, on 4th December 2021, on the occasion of her first solo exhibition at October Gallery, Your Wildest Dreams. In her latest solo exhibition, Craig presents a newly completed series of reimaged hard-edge paintings, which are based on Cheyenne cultural design and autobiographical observation.

The process is meticulous and meditative, often obsessive in mark and repetition. She draws inspiration from Indigenous textiles, beadwork, pottery and landscapes. Her work shares personal stories through abstraction, colour and rhythm. She engages past, present and future to depict Indigenous design through a contemporary lens. Craig creates new narratives within her work while celebrating her ancestors and Indigenous land. Her abstract paintings and prints expand the definition of Native American art, and how culture is transmitted.

In his new series, Eddy Kamuanga furthers his investigations of the Democratic Republic of Congo’s history by examining the effect of Catholic missions in the country from the end of the 19th century onwards. His large-scale figurative compositions offer insight into the colonial influence of such enterprise, and into the acts of resistance that it triggered. Kamuanga has been exhibited internationally at institutions including Frist Art Museum, Nashville, Tennessee, USA; Kunsthaus, Graz, Austria; Birmingham Museum & Art Gallery, Birmingham, UK; Saatchi Gallery; and the Royal Academy of Arts, London, UK. His work is in many important private and public collections. In 2020 he was named as one of Apollo Magazine’s ‘40 Under 40 Africa’: an accolade celebrating artists, thinkers, business leaders and advocates who have pioneered arts from Africa and the Diaspora.

Sorana Munsya is a Congolese curator, artist, agent and psychologist living in Brussels. In her curatorial practice and writings, she is concerned with the connections between art and individual as well as collective healing strategies or practices. Focused on contemporary visual art created by African artists, she was the assistant curator of the 5th Lubumbashi Biennale of Contemporary Art. She is part of the editorial team of the Belgian art magazine HART and has written for many art catalogues, including the catalogue for the 12th edition of the Bamako Encounters, the catalogue for the most recent solo exhibition of Pascale Marthine Tayou’s works, and the Congoville exhibition catalogue. She recently curated the last solo exhibition of the Belgian-Congolese artist Leonard Pongo at Bozar, Brussels, and the last solo exhibition of Congolese artist Michele Magema.

Jean-Sylvain Tshilumba Mukendi is an independent researcher, writer and art practitioner. In 2019, he obtained an MA in Art History as part of the Arts of Africa and Global Souths research programme (NRF) at Rhodes University, South Africa. His research interests focus on art practices of Africa and its diaspora, and the relevance of globalism in the contemporary art world. He has collaborated with several cultural institutions and art platforms including: The Prince Claus Fund (Amsterdam), The Kin ArtStudio (Kinshasa), Pavillon 54 and Picha (Lubumbashi). His writings have been featured in Art Africa Magazine, ArtThrob and Créer en postcolonie. Voix et dissidences belgo-congolaises, edited by Bozar books.

Please note that if the artist is unable to enter the UK due to coronavirus restrictions, he will participate in the talk remotely.

Benji Reid considers himself a choreo-photolist, a term he coined to encapsulate his unique practice where theatricality, choreography, and photography meet in the image. His breathtaking photographs, comprised primarily of self-portraits in incredible, anti-gravitational poses with a medley of props, draws the audience into a different dimension. In the hyper-realities he presents, the subject is liberated by acts of the artist’s imagination. Whether exploring life as an outsider, issues surrounding mental health, or complexities of fatherhood, Reid makes the audience part of the discussion. Each perfectly poised portrait, set against vivid backdrops and adorned with fantastical objects, addresses the world we live in. Everyday objects like a paddle, a sparkler, or a stool transform and transport the subject into an alternative reality, which offers protection and liberation.

Reid was shortlisted for the Wellcome Photography Prize 2020 and received the award for the Mental Health (single image) category for his work Holding onto Daddy (2016).

Roger Robinson is a writer who has performed worldwide. He is the winner of the T. S. Eliot Prize 2019 and the Royal Society of Literature Ondaatje Prize 2020, and is a Royal Society of Literature fellow. He was chosen by Decibel as one of fifty writers who have influenced the Black-British writing canon. His latest collection, A Portable Paradise, was a New Statesman book of the year. He is an alumnus of The Complete Works and was shortlisted for the OCM Bocas Poetry Prize, the Oxford Brookes Poetry Prize, commended by the Forward Poetry Prize, and shortlisted for the Derek Walcott Prize for Poetry 2020. He has received commissions from the National Trust, London Open House, the BBC, the National Portrait Gallery, the V&A, INIVA, MK Gallery, and Theatre Royal Stratford East, where he also was associate artist. He is an experienced workshop leader and has toured extensively with the British Council. His workshops have been part of a shortlist for the Gulbenkian Prize for museums and galleries, and were also a part of the Barbican’s Webby Award-winning ‘Can I Have a Word?’. He is co-founder of both Spoke Lab and the international writing collective Malika’s Poetry Kitchen. He is the lead vocalist and lyricist for King Midas Sound and has also recorded solo albums with Jahtari Records.
Rafael Trelles. Photo: Rebecca Zilenziger, 2019.
Gallery Talk:
Rafael Trelles
at October Gallery and livestream via Facebook
We're pleased to announce a Gallery Talk with Rafael Trelles will be held at October Gallery on 26th June 2021.

Trelles will discuss the work in the new exhibition 'Axis Mundi.' Many of the paintings were created during a difficult period of pandemic ‘lockdown’, in 2020, during which the artist, isolated in his urban studio, persevered with his work.

"Without doubt, ecological disruption and the growing environmental crises are implicitly present in my work. The inhabitants of these imaginary worlds are fully integrated with nature. As they metamorphose into plants and animals, they epitomise a symbolic expression of ecological ethics. I hope that cosmopolitan audiences in London, who value the cultural richness transmitted in the animistic beliefs of the ancient peoples of these islands and beyond, will identify with the vision of reality that I propose. If we read the runes correctly, we realise that we are not just in nature – we are nature, and to destroy nature is to destroy ourselves."
- Rafael Trelles
Concert:
CRISP&CLASSY Live at October Gallery
For the third gig in October Gallery’s socially-distanced live music series, LGBTQ and feminist pop duo CRISP&CLASSY will be taking the stage on Saturday, 10th October, 2020.

CRISP&CLASSY is a musical love affair, comprised of producer Kat Knix and singer-songwriter Plushy. The duo bring sexual liberation and self-acceptance to the UK electronic pop music scene through their graphic lyrics and 90s flavours. Their sound is a combination of sassy pop, soul and 90's diva-inspired melodies to hip hop beats.

Kat Knix made her first release - a remix of The Knife's 'Without You My Life Would Be Boring’ in May 2014 via Brille Records, before releasing her debut single on Hybris Records in 2016. Meanwhile, Plushy was hitting Chicago and New York radio with the bass line remix of his debut single ‘Darkness’ in 2015.

Following the release of their second single ‘Blessed’ on 15th May 2020 and a string of remixes on 14th August 2020, CRISP&CLASSY will perform at October Gallery on Saturday, 10th October, 2020.
Show More Past Events
MYANCHOR-4