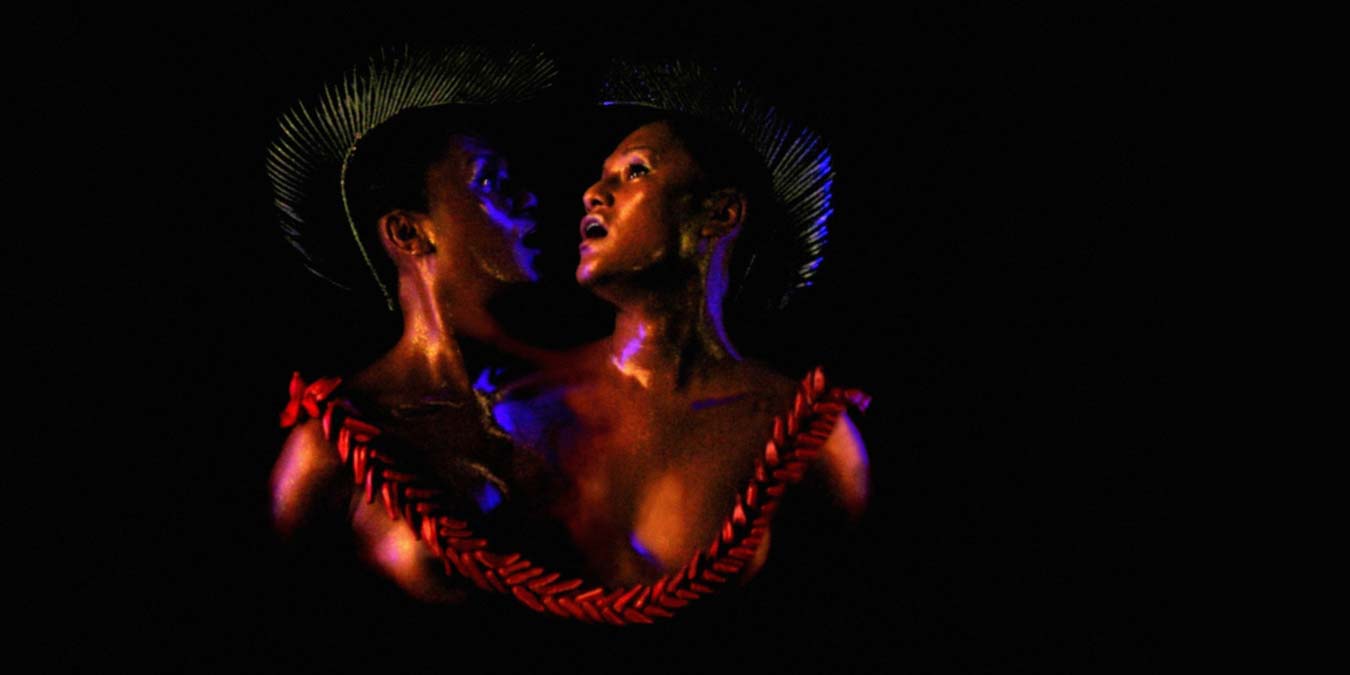 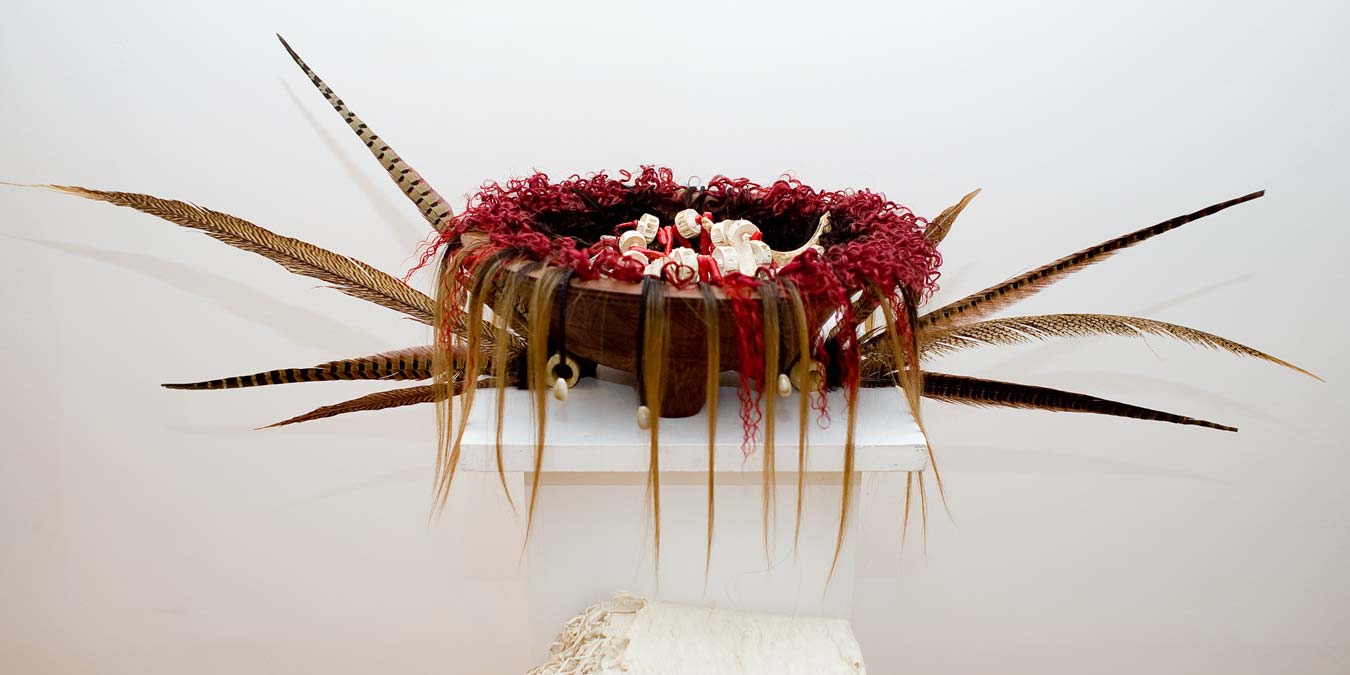 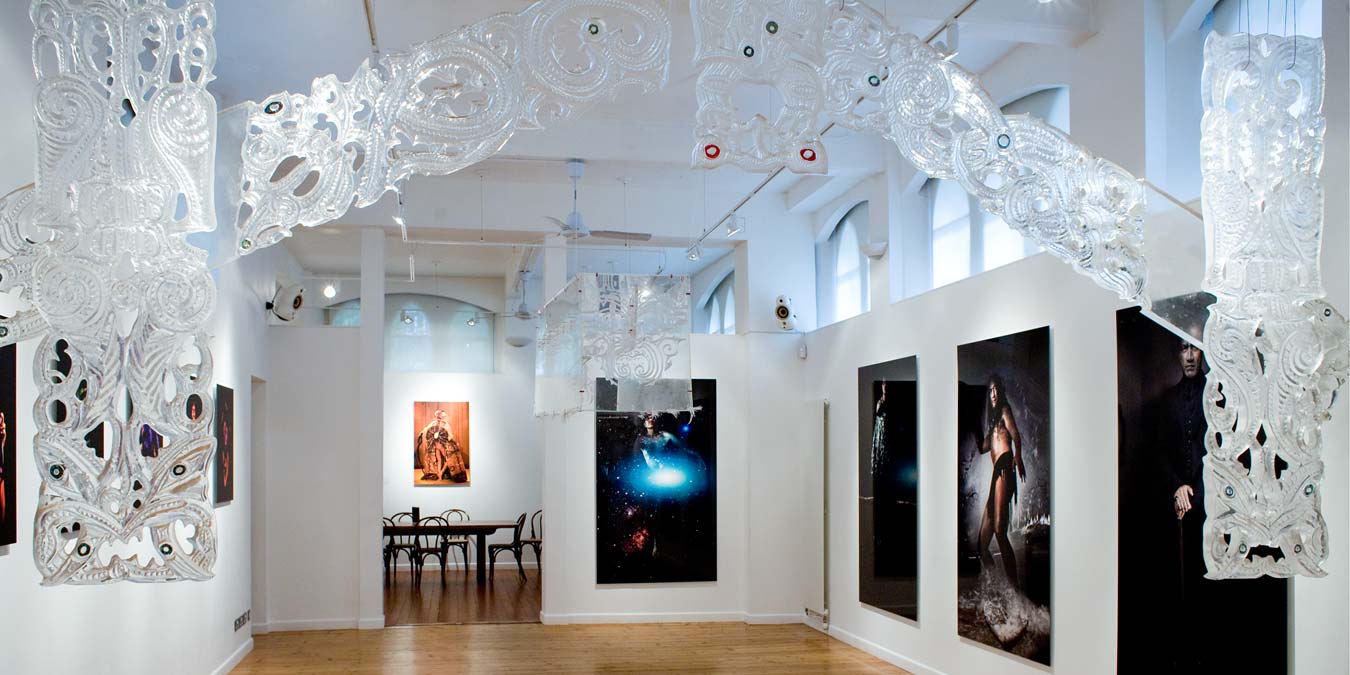 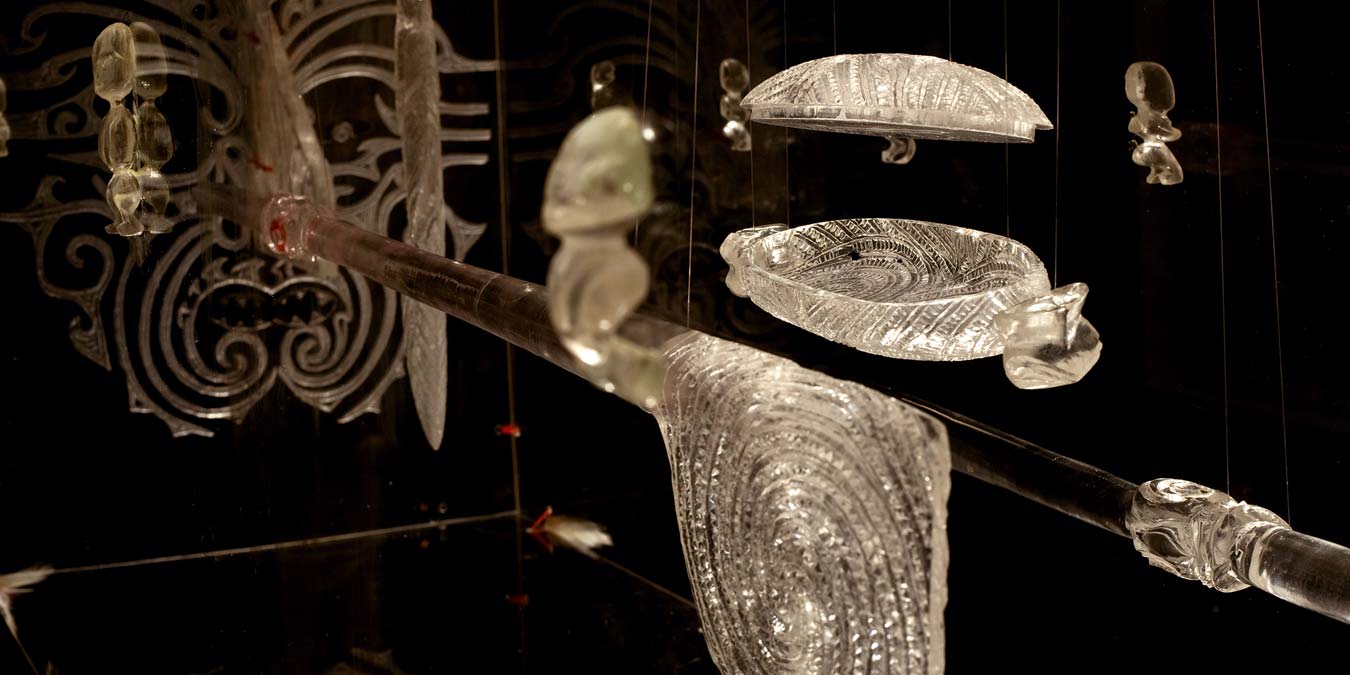 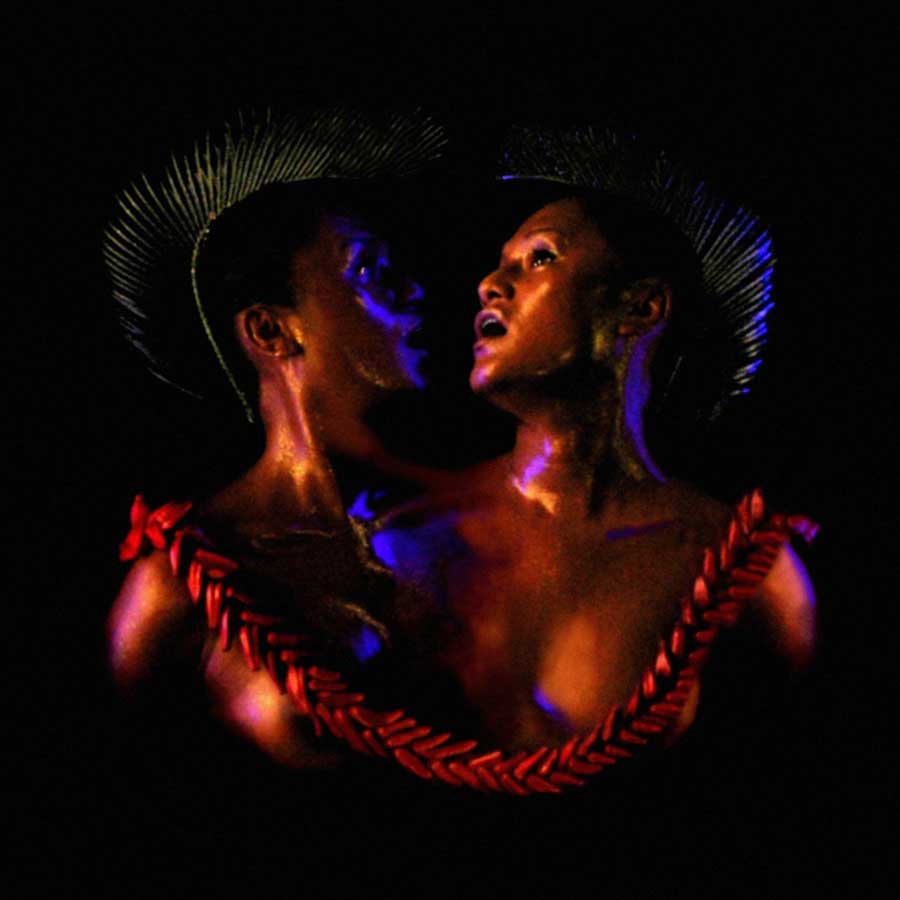 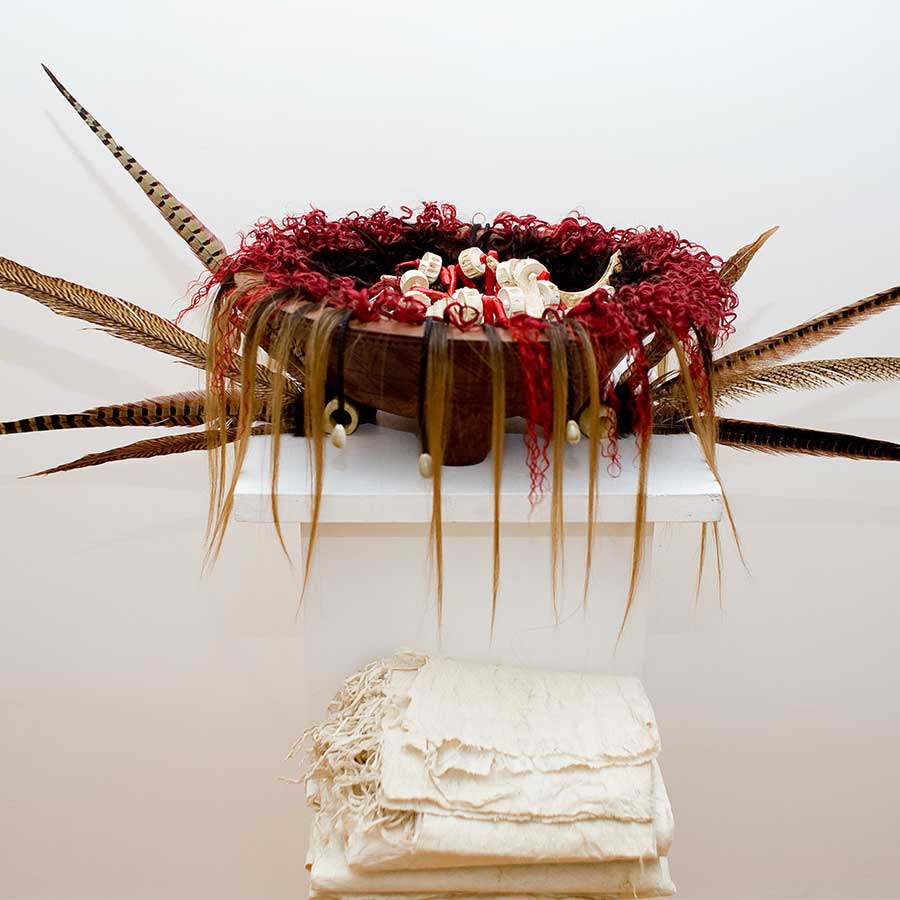 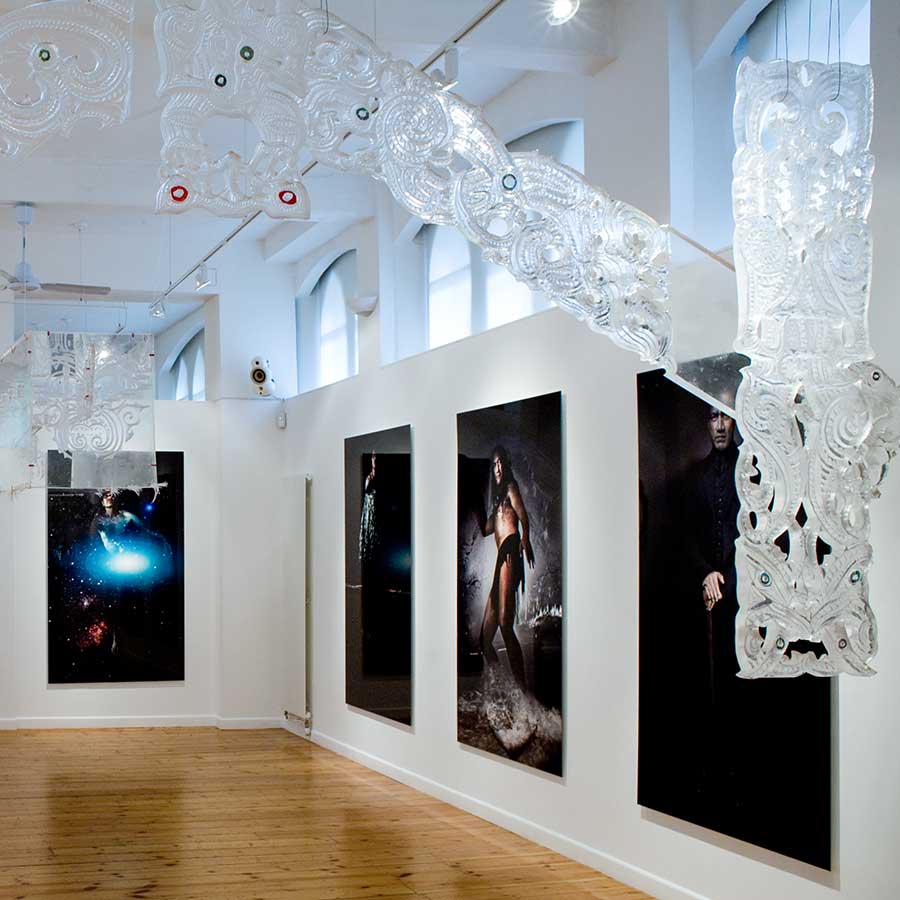 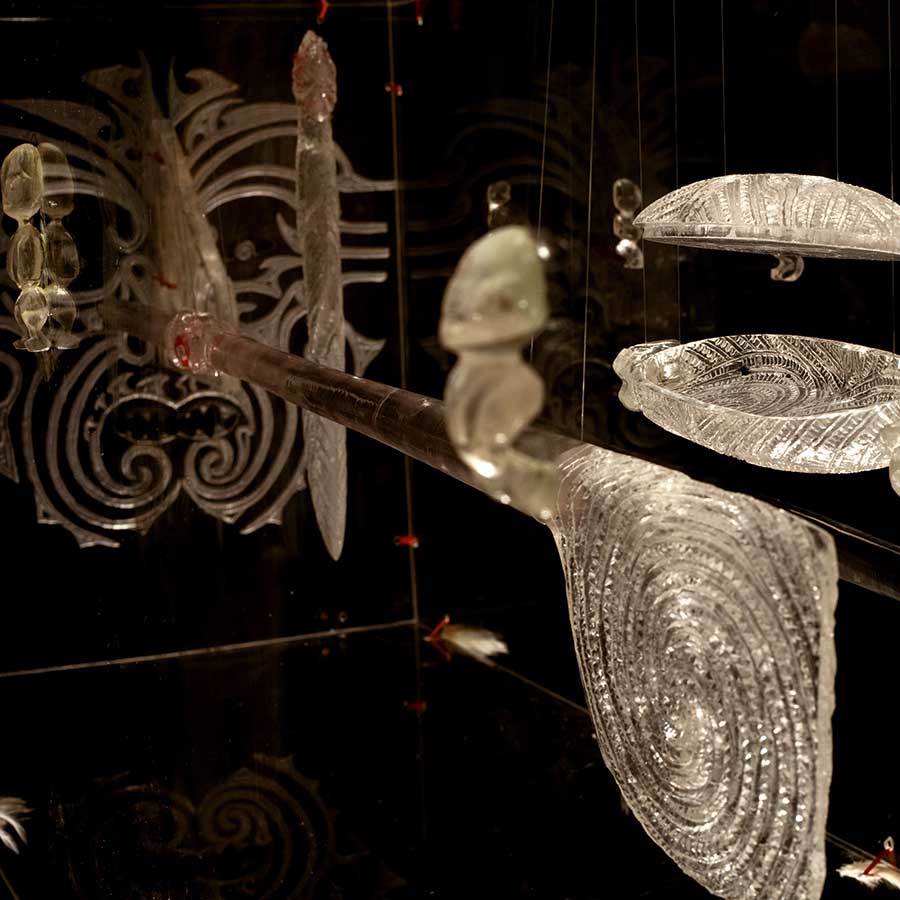 The first exhibition of its kind in London, ethKnowcentrix - Museums Inside the Artist features mixed media and performance work exploring the idea of the ethnographic gaze, by four leading artists from Aotearoa (New Zealand) and the Pacific Islands.

Visions of exotic beauty and mystery have dominated British perceptions of the Pacific Islands since the time of Captain Cook.  Fuelled by the fantastic narratives of returning explorers, anthropologists and artists, this exotic imagery provided the basis for museum displays and underpinned the emerging discipline of ethnography (the classification of people and cultures). Yet, while the Europeans were busy imagining ‘Noble Savages’ and ‘Dusky Maidens’, the Pacific Islanders were looking back at them, negotiating, exchanging and sharing goods and ideas on their own terms.  This exhibition reconsiders the spaces of meeting, looking and representing across cultures, and explores how the ethnographic gaze has been reciprocated and challenged.  With acerbic wit, these works promise to radically subvert the European legacy of museum classification, reclaim popular imagery of Pacific Island culture, and offer fresh perspectives for a shared global future.

Shigeyuki Kihara is a multimedia and performance artist who uses photography to explore themes of representation, spirituality, performativity, and gender. In her photographic series Vava‘u: Tales from Ancient Samoa, she enacts characters from the Samoan creation stories, composing the prints as parodies of the kitsch genre of velvet paintings popular in the USA in the 1960s, which sexualised Pacific Island women. By reclaiming control over the construction of the image, Kihara presents herself as both the subject and the object to be viewed, tapping the potential of the self-portraiture medium to challenge and subvert the expectations of the viewer. These expectations are further confounded by the knowledge that Kihara belongs to the liminal gender space of the fa’afafine, biological males who live as women, a role that is well accepted by Samoan society. Born in Samoa, but currently based in Aotearoa (New Zealand), Kihara became, in 2008, the first living artist from Samoa, New Zealand and the South Pacific region to hold a solo exhibition at New York’s Metropolitan Museum of Art, following the acquisition of her work by the museum for its permanent collection.

George Nuku is an internationally celebrated sculptor and multimedia artist.  Trained in the Maori tradition of carving, he works in natural media such as bone, stone and shell, but also with synthetic materials such as plastic, Perspex and polystyrene.  “Tradition is about the ongoing process of being innovative” he explains, “I want to make things that my ancestors haven’t seen before…I can’t just photocopy what they did, I don’t think they want us to do that.”  In a work specially commissioned for the exhibition, Nuku revisits the archetypal space of ethnographic contact, the museum.  Evoking the colonial curiosity cabinet, Nuku’s display cases gradually release their captive objects, freeing them to be touched by the visitor, and transgressing the physical boundaries which traditionally separate and delineate cultures in the museum.  “These objects are bigger than the box that holds them” he continues, “we need to recognise that there’s a divinity to every material, every thing.”  Nuku was recently commissioned to create a unique waharoa (gateway sculpture) for the entrance to the New Zealand Room at the 2009 Venice Biennale.

Rosanna Raymond is a poet, performer, costume designer, dancer, and jewellery-maker, as well as an artist and curator.  In a new work for this exhibition, she continues her long-running investigation into the motif of the Dusky Maiden.  From the eighteenth century oil paintings of Captain Cook’s resident artist William Hodges, to the works of Paul Gauguin, and into the present, the image of Pacific Island women as semi-clad, naïve yet sexually receptive ‘Dusky Maidens’ has pervaded the Western imaginary.  Within Maori and Pacific Island culture however, women are understood to descend from powerful goddesses, and to be duly imbued with great potency and strength. In The Dusky Ain’t Dead She’s Just Diversified, Raymond reclaims the Dusky Maiden, exposing her latent power, and celebrating her diversity of guises, in rejection of the singular conception of Pacific beauty suggested by Western visual discourse.  Employing poetry, performance, costume, body adornment, film and photography, the work will evolve over the course of the exhibition to produce a resounding celebration of the female spirit.  Born in New Zealand, Raymond is of Samoan-Päkehä descent, and currently lives and works in London. She was a founding member of the acclaimed art collective Pacific Sisters, and was co-curator and artistic director of the Pasifika Styles festival in Cambridge between 2006 and 2008.

Lisa Reihana is a Maori artist whose work comments on gender politics, cultural agency and museological interventions, and who has played a leading role in the development of film and multimedia art in Aotearoa (New Zealand).  For ethKnowcentrix, she presents the male atua (ancestral deities) from her photographic series Digital Marae.  Marae meeting houses are central to Maori community life, and serve as a site for discussion, ceremony and celebration.  Reihana’s Digital Marae reconsiders locations of identity and belonging through a series of portraits of mythical and ancestral atua, such as Dandy.  In his juxtaposition of Ta Moko facial tattoo and nineteenth century European dress, Dandy signals the possibility of inhabiting plural realms. As a takatapui or ‘third gendered’ person, he occupies a liminal space not only between genders, but also between false oppositions such as indigenous/ foreign and traditional/ modern.  Reihana invites us to delve beyond such categories and investigate the intertwined complexity of our shared histories. Lisa Reihana has undertaken two commissions for Te Papa Tongarewa (the Museum of New Zealand), and has represented New Zealand at the 2000 Sydney Biennale, the 1996 and 2002 Asia Pacific Triennales in Brisbane, and the Noumea Biennale in 2002.  Her work also featured in Paradise Now? at the Asia Society Museum in New York in 2004, and in Latitudes at the Havana Biennale in 2009.

Hands 2Tusks Saturday 11th July, 6.30 pm (Price £12)
A fundraising event fusing Polynesian narratives with poetry, storytelling, living installations, body adornments and performance by Rosanna Raymond and UK based Polynesian artists. Finger foods are included in the price and there will be a cash bar.

After a formal Polynesian welcome, Rosanna Raymond will weave performance and visual arts together, looking at words as concrete artefacts and textiles in a session shared with spoken-word artist Malika Booker. George Nuku will speak on the theme of diversity in cultural institutions in a session shared with artist Raimi Gbadamosi. Shigeyuki Kihara will present a talk and a film about Fa’a fafine; Gender & Sexual minorities in the Pacific in a shared session with the performance artist Noel Wallace. Lisa Reihana will screen selected video projects, sharing a session with artist and film-maker Isaac Julien. This diverse and multi-disciplinary event aims to stimulate critical conversations and to explore new understandings between cultures. Artists, students, performers and scholars from the UK and Polynesia will discuss the issues and challenges faced by cultural leaders, artists, researchers and curators in today’s global art markets. These themes are developed in the ethKnowcentrix exhibition, which focuses on the ways in which artists reclaim and subvert the ‘ethnographic gaze’ historically applied to Polynesian culture in the West. The day will end with a more informal but nevertheless very important aspect of Polynesian protocol, a shared meal and entertainment from UK based Polynesian performers.

Poroporoaki (Farewell) Saturday 10th October, 3.00 pm (Free)
A day of celebration to mark the end of the exhibition, with the UK based Polynesian community and artists George Nuku and Rosanna Raymond, featuring artists’ talks, performances and a final closing ceremony. Traditional Polynesian food and drinks will be on sale.